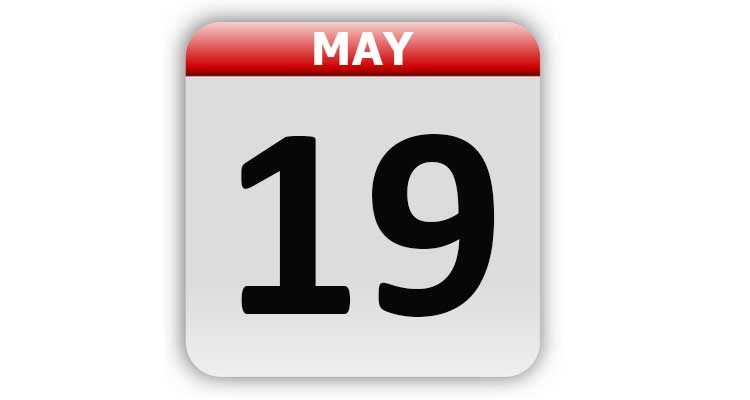 1796 – The first U.S. game law was approved. The measure called for penalties for hunting or destroying game within Indian territory.

1847 – The first English-style railroad coach was placed in service on the Fall River Line in Massachusetts.

1903 – The Buick Motor Company was incorporated in Detroit, MI.

1911 – The first American criminal conviction that was based on fingerprint evidence occurred in New York, NY.

1926 – Thomas Edison spoke on the radio for the first time.

1935 – The National Football League (NFL) adopted an annual college draft to begin in 1936.

1965 – FBI agents visited Wand Records to investigate the lyrics to the song “Louie Louie” by the Kingsmen.

1973 – Secretariat won the second jewel in the Triple Crown, the Preakness Stakes.

1975 – Elton John’s “Captain Fantastic and the Brown Dirt Cowboy” album was released in the United States. It was the first album to be certified a million-seller on its first day of release.

1992 – Vice President Dan Quayle criticized the CBS sitcom “Murphy Brown” for having its title character decide to bear a child out of wedlock.

1992 – The 27th Amendment to the U.S. Constitution went into effect. The amendment prohibits Congress from giving itself midterm pay raises.

1999 – “Star Wars Episode I: The Phantom Menace” opened in theaters and set a record for opening day ticket sales of $28.5 million.

2000 – The bones of the most complete and best-preserved Tyrannosaurus Rex skeleton went on display in Chicago, IL.

2003 – Hundreds of Albert Einstein’s scientific papers, personal letters and humanist essays were made available on the Internet. Einstein had given the papers to the Hebrew University of Jerusalem in his will.

2013 – The Yahoo board approved the $1.1 billion purchase of the blogging site Tumblr.

2018 – England’s Prince Harry and Meghan Markle got married. It is estimated that more than three billion people watched the event on television or the internet.

Tags: A Look Back, Celebrity Birthdays, Days of the Year, May 19, Today in History