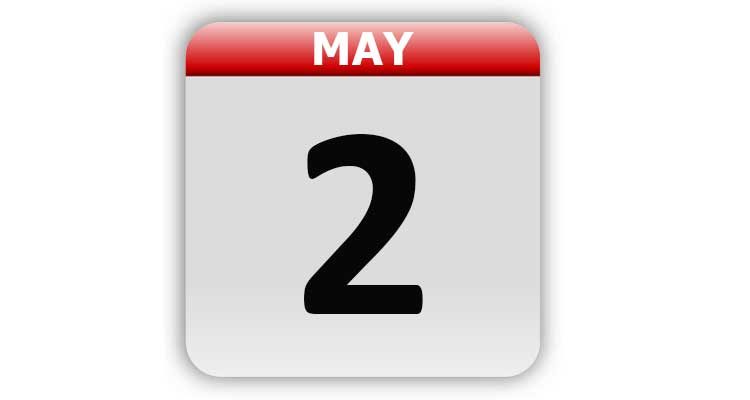 1611 – The King James Bible was published for the first time in London, England by printer Robert Barker.

1887 – Hannibal W. Goodwin applied for a patent on celluloid photographic film. This is the film from which movies are shown.

1890 – The Oklahoma Territory was organized.

1939 – Lou Gehrig, of the New York Yankees, set a new major league baseball record when he played in his 2,130th game. The streak began on June 1, 1925. He voluntarily benched himself after playing 2,130 consecutive games.

1941 – The Federal Communications Commission agreed to let regular scheduling of TV broadcasts by commercial TV stations begin on July 1, 1941. This was the start of network television.

1954 – Stan Musial, of the St. Louis Cardinals, set a new major league record when he hit 5 home runs against the New York Giants.

1964 – While speaking in Ann Arbor, MI at the University of Michigan Spring Commencement, President Lyndon B. Johnson announced plans for his “Great Society” plan.

1965 – The “Early Bird” satellite was used to transmit television pictures across the Atlantic.

1969 – The ocean liner Queen Elizabeth 2 (QE2) made its maiden voyage from England to the United States.

1982 – The Weather Channel debuted. It was founded by veteran television meteorologist John Coleman (who served as a chief meteorologist at WLS-TV in Chicago and as a forecaster for “Good Morning America”) and Frank Batten, then-president of the channel’s original owner Landmark Communications. The channel launched at 8:00 p.m. Eastern Time on May 2, 1982.

1986 – The City of Chernobyl was evacuated six days after the disaster.

1999 – The Mercury space capsule, which carried Gus Grissom on America’s second manned space flight, was discovered off the Florida shore 38 years after it was lost.

2000 – President Bill Clinton announced that accurate GPS access would no longer be restricted to just the United States military.

2004 – Television’s “Doctor Phil” McGraw was slapped with a class action lawsuit that charged he knowingly deceived consumers with false claims about his line of weight-loss products.

2008 – The movie “Ironman” (based on the Marvel Comics character of the same name), starring Robert Downey Jr., debuted in theaters.

2008 – Sean “Diddy” Combs became the first male rapper to get a star on the Hollywood Walk of Fame.

2012 – A pastel version of “The Scream” by Norwegian painter Edvard Munch, sold for $120 million in a New York, NY auction, setting a new world record for a work of art at auction.

2015 – A 4.2 earthquake centered near Galesburg, MI (between Battle Creek and Kalamazoo) hit west Michigan. It was the state’s most powerful quake since 1947.

Tags: A Look Back, Celebrity Birthdays, Days of the Year, May 2, Today in History