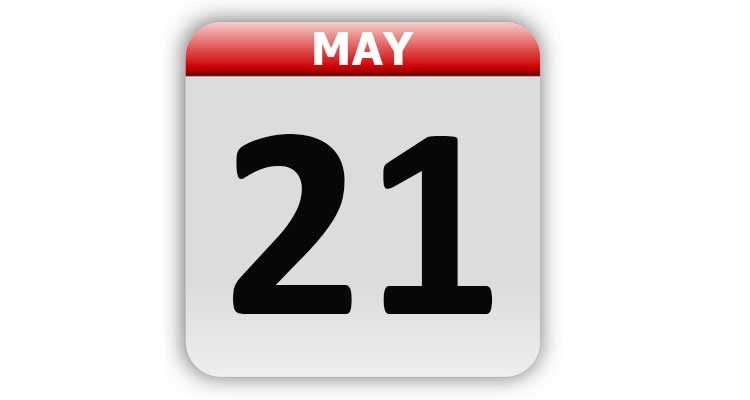 1819 – Bicycles were first seen in the U.S. in New York, NY. They were originally known as “swift walkers”.

1881 – The American branch of the Red Cross was founded by Clara Barton in Washington, DC.

1891 – Peter Jackson and Jim Corbett fought for 61 rounds only to end in a draw.

1914 – The Greyhound Bus Company was formed in Minnesota.

1927 – Charles A. Lindbergh completed the first solo nonstop airplane flight across the Atlantic Ocean when he landed at Le Bourget Field in Paris. The trip began May 20.

1929 – The first automatic electric stock quotation board was used by Sutro and Company of New York, NY.

1929 – William Henry Storey registered the trademark for the board game “Sorry!” in the U.K.

1931 – The robin was named the official state bird of Michigan.

1932 – Bad weather forced Amelia Earhart to land in a pasture in Derry, Northern Ireland. She became the first woman to fly solo across the Atlantic Ocean.

1934 – Oskaloosa, IA, became the first city in the U.S. to fingerprint all of its citizens.

1937 – The song “My Michigan” was adopted as the official state song. The song as composed and written by Giles Kavanagh and H. O’Reilly Clint. It was chosen because it expressed the hopes, ambitions and pride of the people of the State of Michigan. “My Michigan” should not be confused with the song “Michigan, My Michigan” by Douglas Malloch.

1947 – Joe DiMaggio, and five of his New York Yankee teammates, were fined $100 because they had not fulfilled contract requirements to do promotional duties for the team.

1956 – The U.S. exploded the first airborne hydrogen bomb in the Pacific Ocean over Bikini Atoll.

1968 – The nuclear-powered U.S. submarine Scorpion, with 99 men aboard, was last heard from. The remains of the sub were later found on the ocean floor 400 miles southwest of the Azores.

1992 – The TV show “Real World” debuted on MTV. Seven strangers were placed in a home and we learned “what happens… when people stop being polite… and start getting real”.

1992 – After 30 seasons, Robin Williams and Bette Midler were Johnny Carson’s last guests on TV’s “The Tonight Show”, one night before the show aired its final episode.

1997 – Susan Lucci lost out in the running for the Best Actress Daytime Emmy for a 17th consecutive year.

1998 – Kip Kinkel, an expelled high school student in Springfield, OR, killed two people and wounded 25 others with a semi-automatic rifle in a school shooting spree. After he was apprehended, police learned that the boy had killed his parents the day before the rampage.

1998 – Microsoft and Sega announced that they were collaborating on a home video game system.

2001 – The first Bratz dolls hit the shelves as Yasmin, Jade, Sasha, and Cloe were introduced to the public.

2005 – The tallest roller coaster in the world at the time, Kingda Ka, opened at Six Flags Great Adventure in Jackson Township, NJ.

2011 – Radio broadcaster Harold Camping predicted that the end of the world would occur on this day. Obviously, he was wrong.

2014 – The National September 11 Museum opened to the public.

I Need a Patch for That Day

Tags: A Look Back, Celebrity Birthdays, Days of the Year, May 21, Today in History