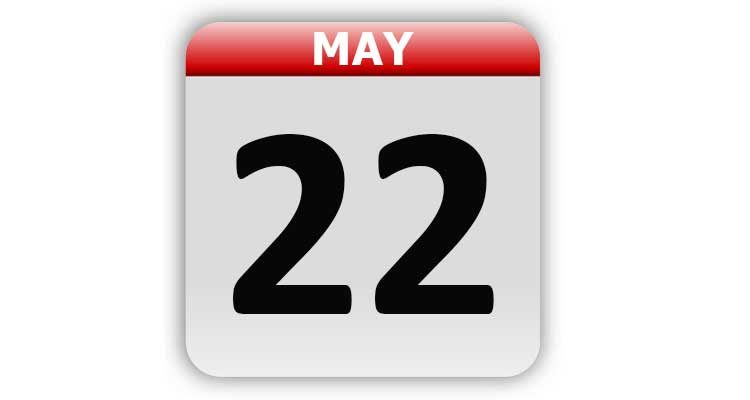 1761 – In Philadelphia, PA, the first life insurance policy was issued in the U.S.

1819 – The steamship Savannah became the first to cross the Atlantic Ocean.

1841 – Henry Kennedy received a patent for the first reclining chair.

1849 – Future President Abraham Lincoln received a patent for the floating dry dock. It was an invention to lift boats over obstacles in a river, making him the only President to ever hold a patent.

1868 – Near Marshfield, IN, the “Great Train Robbery” took place. The robbery was worth $96,000 in cash, gold and bonds to the seven members of the Reno gang.

1900 – The Associated Press was incorporated as a non-profit news cooperative in New York, NY.

1900 – Edwin S. Votey received a patent for the pianola (a pneumatic piano player). It could be attached to any piano.

1906 – The Wright brothers received a patent their flying machine.

1955 – A scheduled dance to be headlined by Fats Domino was canceled by police in Bridgeport, CT, because “rock and roll dances might be featured.”

1967 – Children across the United States began turning on the TV to watch a single man take off his sweater and shoes and play with puppets. The children’s television show “Mister Rogers’ Neighborhood” premiered on PBS.

1969 – A lunar module of Apollo 10 flew within nine miles of the moon’s surface. The event was a rehearsal for the first lunar landing.

1977 – Janet Guthrie set the fastest time during the second weekend of qualifying, becoming the first woman to earn a starting spot in the Indianapolis 500 since its inception in 1911.

1986 – Sylvester Stallone agreed to a 10-picture, six-year deal with United Artists. He signed for a reported $15 million for each film.

1998 – Microsoft included the game of Solitaire within their release of Windows 3.0.

1998 – A federal judge said that Secret Service agents could be compelled to testify before a grand jury in Monica Lewinsky investigation concerning President Bill Clinton.

2002 – Chandra Levy’s remains were found in Washington, DC’s Rock Creek Park. She was last seen on April 30, 2001. California Congressman Gary Condit was questioned in the case due to his relationship with Levy.

2002 – Barry Bonds, of the San Francisco Giants, hit his 583rd career home run. He tied Mark McGwire for fifth on the all-time list.

2003 – At the Colonial in Fort Worth, TX, Annika Sorenstam became the first woman to play on the PGA tour in 58 years. She ended the day at 1-over par.

2004 – The town of Hallam, NE, was wiped out by a powerful F4 tornado which killed one resident and became the widest tornado on record at 2.5 miles wide. That record wouldn’t be broken until the El Reno tornado on May 31st, 2013.

2011 – The Grand Rapids LipDup was filmed. Over 5,000 people participated and most of downtown Grand Rapids was shut down to film the video, which featured a parade, a wedding, and helicopter take offs — all planned out precisely. It was the largest LipDub video to date. You can watch the video here. The video has almost 6 million views on YouTube.

2012 – The Tokyo Skytree was opened to the public. It is the tallest tower in the world and the second tallest man-made structure on Earth.

2017 – Twenty-two people were killed at an Ariana Grande concert at the Manchester Arena bombing. It was an Islamist terrorist attack in Manchester, United Kingdom.

International Being You Day

Tags: A Look Back, Celebrity Birthdays, Days of the Year, May 22, Today in History