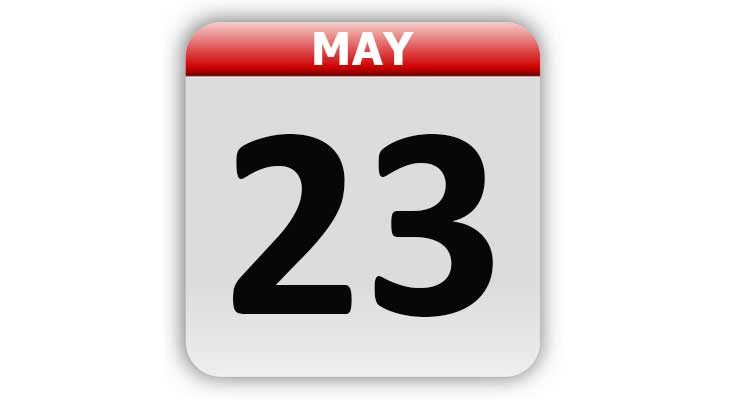 1785 – Benjamin Franklin wrote in a letter that he had invented bifocals.

1846 – Arabella Mansfield was born. She was the first woman in the U.S. to pass the bar exam, though she never used her law degree.

1876 – Boston’s Joe Borden pitched the very first no-hitter in the history of the National League.

1922 – “Daylight Saving Time” was debated in the first debate ever to be heard on radio in Washington, DC.

1934 – In Bienville Parish, LA, Bonnie Parker and Clyde Barrow were ambushed and killed by Texas Rangers. The bank robbers were riding in a stolen Ford Deluxe.

1941 – Joe Louis beat Buddy Baer in the seventh round to retain the heavyweight crown.

1973 – Clive Davis was fired as president of Columbia Records for allegedly using company funds for his personal use. They included $53,700 for work on his apartment and $20,000 for his son’s bar mitzvah.

1984 – The movie “Indiana Jones and the Temple of Doom” premiered in theaters.

1995 – The first version of the Java programming language was released.

1997 – The movie “The Lost World: Jurassic Park” premiered in theaters.

1999 – Gerry Bloch, at age 81, became the oldest climber to scale El Capitan in Yosemite National Park. He broke his own record that he set in 1986 when he was 68 years old.

2005 – Tom Cruise publicly declared his love for Katie Holmes on “The Oprah Winfrey Show” by jumping up and down on Winfrey’s couch during the show. Cruise and Holmes married in 2006 and divorced in 2012.

Tags: A Look Back, Celebrity Birthdays, Days of the Year, May 23, Today in History