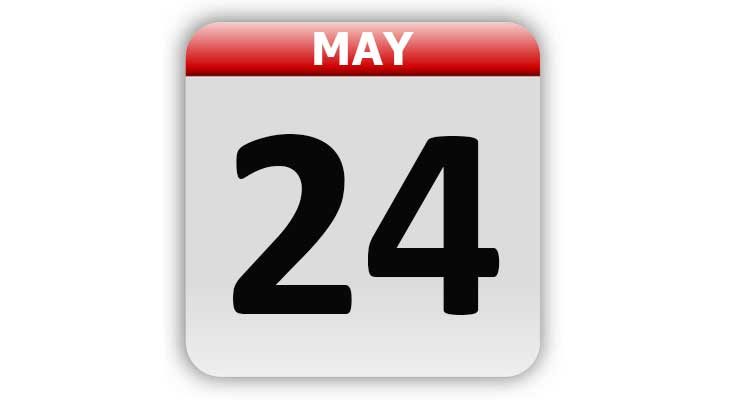 1738 – The Methodist Church was established.

1764 – Bostonian lawyer James Otis denounced “taxation without representation” and called for the colonies to unite in demonstrating their opposition to Britain’s new tax measures.

1830 – The first passenger railroad service in the U.S. began service.

1878 – The first American bicycle race was held in Boston, MA.

1883 – After 14 years of construction the Brooklyn Bridge was opened to traffic.

1899 – The first public garage was opened by W.T. McCullough.

1913 – The U.S. Department of Labor entered into its first strike mediation. The dispute was between the Railroad Clerks of the New York, New Haven and Hartford Railroad.

1930 – Amy Johnson became the first woman to fly from England to Australia.

1931 – B&O Railroad began service with the first passenger train to have air conditioning throughout. The run was between New York, NY and Washington, DC.

1935 – The Cincinnati Reds played the Philadelphia Phillies in the first major league baseball game at night. The switch for the floodlights was thrown by President Franklin Roosevelt.

1950 – Nate “Sweetwater” Clifton of The Harlem Globetrotters became the first African American player in the NBA when the New York Knicks purchase his contract.

1954 – The first moving sidewalk in a railroad station was opened in Jersey City, NJ.

1962 – The officials of the National Football League ruled that halftime of regular season games would be cut to 15 minutes.

1974 – Muhammad Ali scored a TKO over Richard Dunn in Munich to retain his heavyweight title.

1980 – The International Court of Justice issued a final decision calling for the release of the hostages taken at the U.S. embassy in Tehran on November 4, 1979.

1989 – The movie “Indiana Jones and the Last Crusade” opened in theaters.

1991 – The movie “Thelma and Louise” opened in theaters with Geena Davis and Susan Sarandon in the title roles and directed by Ridley Scott.

1999 – Mike Tyson was released from a Maryland jail, having served 3-1/2 months for assaulting two motorists after a collision.

2000 – A Democratic Party event for Al Gore in Washington brought in $26.5 million. The amount set a new record, which had just been set the previous month by Republicans for Texas Gov. George W. Bush.

2001 – Temba Tsheri, 16, became the youngest person to reach the summit of Mount Everest.

2007 – Congress approved the first minimum wage hike in nearly a decade. The measure upped the $5.15 per hour minimum wage by 70 cents before the end of the summer. Wages were boosted another 70 cents the next year, and the minimum wage would be $7.25 by the summer of 2009.

2011 – NASA announced the development of the Orion Multi-Purpose Crew Vehicle (MPCV) spacecraft. It is intended to facilitate exploration of the Moon, asteroids and Mars.

Jim Broadbent – 73 years old (1949) – Actor (“Iris”, “Harry Potter and the Half Blood Prince”, “The Young Victoria”, “Indiana Jones and the Kingdom of the Crystal Skull”, “The Chronicles of Narnia: The Lion, The Witch and the Wardrobe”, “Gangs of New York”, “Moulin Rouge”)

Tags: A Look Back, Celebrity Birthdays, Days of the Year, May 24, Today in History