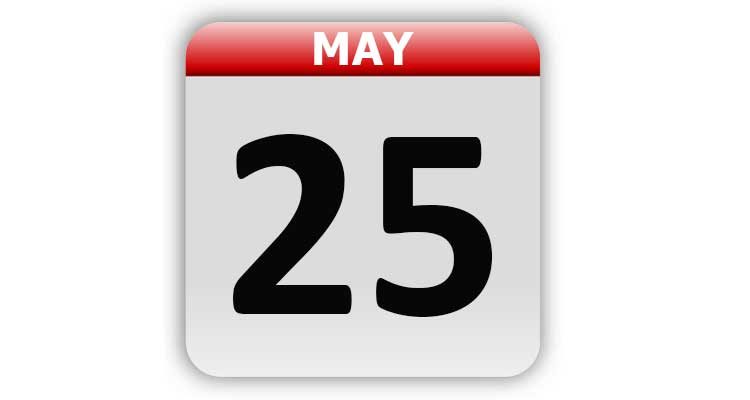 1844 – The gasoline engine was patented by Stuart Perry.

1927 – Ford Motor Company announced that the Model A would replace the Model T.

1927 – The “Movietone News” was shown for the first time at the Sam Harris Theatre in New York, NY.

1935 – Babe Ruth, then playing for the Boston Braves, hits the 714th and final home run of his career. A record that would stand for 39 years.

1935 – In Ann Arbor, MI, at a Big Ten Conference Track and Field Championship, Jesse Owens tied the world record for the 100-yard dash. He ran it in 9.4 seconds. He also broke three other world track records.

1953 – The first public television station in the U.S. officially began broadcasting as KUHT from the campus of the University of Houston.

1961 – John F. Kennedy promised to land a man on the moon by the end of the decade, which did happen.

1965 – Muhammad Ali knocked out Sonny Liston just one minute and 42 seconds into their heavyweight championship fight at Lewiston, ME.

1968 – The Gateway Arch, part of the Jefferson National Expansion Memorial in St. Louis, MO, was dedicated.

1978 – The first bomb of a series of bombings orchestrated by the Unabomber detonated at Northwestern University resulting in minor injuries.

1979 – An American Airlines DC-10 crashed during takeoff at Chicago’s O’Hare International Airport, killing all 258 passengers and 13 crew on board and two people on the ground. It is the deadliest aviation accident to have occurred in the United States.

1981 – Daredevil Daniel Goodwin scaled the Sears Tower, in Chicago, IL. It took him 7 1/2 hours. He was dressed as Spiderman and used suction cups.

1983 – Michael Jackson stole the show with his moonwalk in the NBC television special “Motown 25: Yesterday, Today and Tomorrow”. Other stars of the broadcast include Diana Ross, Stevie Wonder, Marvin Gaye, Lionel Richie, The Four Tops, The Temptations and Smokey Robinson reuniting with The Miracles.

1985 – Bangladesh was hit with a hurricane and tidal wave that killed more than 11,000 people.

1986 – Approximately 5 million people participated in “Hands Across America” to make a human chain across the U.S. to raise money for the hungry and homeless. The event raised over $15 million.

2000 – The Walt Disney Co. and Time Warner Inc. signed a long-term deal that ended a dispute over the airing policies of Time Warner. Time Warner had blacked out Disney programs for a 39 hour period the previous month due to the lack of an agreement.

2006 – In Houston, TX, former Enron Corp. chiefs Kenneth Lay and Jeffrey Skilling were convicted of conspiracy and fraud for the downfall of Enron.

2007 – The movie “Pirates of the Caribbean: At World’s End” opened in theaters, with Keith Richards as the father of Johnny Depp’s character, Captain Jack Sparrow.

2007 – ABC announced that Rosie O’Donnell had been released from her contract and would not be returning to TV’s “The View”.

2011 – In Tucson, AZ, Jared Lee Loughner, charged with various federal and state crimes for shooting Congresswoman Gabrielle Giffords and murdering six others on January 8th, was found to be mentally incompetent to stand trial.

2012 – The SpaceX Dragon became the first commercial spacecraft to successfully rendezvous with the International Space Station.

2020 – In Minneapolis, MN, George Floyd was killed after a police officer kneeled on his neck for an extended period of time, setting off worldwide protests.

Tags: A Look Back, Celebrity Birthdays, Days of the Year, May 25, Today in History