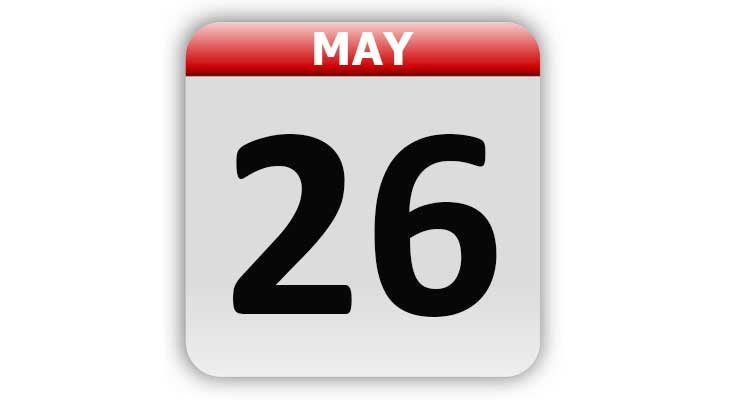 1865 – Arrangements were made in New Orleans for the surrender of Confederate forces west of the Mississippi.

1868 – President Andrew Johnson was acquitted, by one vote, of all charges in his impeachment trial.

1896 – The Dow Jones Industrial Average appeared for the first time in the “Wall Street Journal”.

1923 – The first auto race at Le Mans was held. It has since been run annually in June.

1959 – The word “Frisbee” became a registered trademark of Wham-O.

1961 – A U.S. Air Force bomber flew across the Atlantic in a record time of just over three hours.

1967 – “Sgt. Pepper’s Lonely Hearts Club Band” by The Beatles was released in the UK.

1969 – The Apollo 10 astronauts returned to Earth after a successful eight-day dress rehearsal for the first manned moon landing.

1975 – American stuntman Evel Knievel suffered severe spinal injuries in Britain when he crashed while attempting to jump 13 buses in his car.

1977 – George H. Willig was arrested after he scaled the South Tower of New York’s World Trade Center. It took him 3-1/2 hours.

1978 – The first legal casino in the Eastern U.S. opened in Atlantic City, NJ.

1981 – Motown Records announced plans for a yearlong silver anniversary salute in 1982 to mark the 25th year of association between Berry Gordy and Smokey Robinson.

1994 – Michael Jackson and Lisa Marie Presley were married in the Dominican Republic. They were divorced in January of 1996.

1995 – The live action movie “Casper” premiered in theaters. It was the first film with a computer generated lead character.

1998 – The Supreme Court ruled that Ellis Island was mainly in New Jersey, not New York.

1998 – The Supreme Court ruled that police officers in high-speed chases are liable for bystander injuries only if their “actions shock the conscience.”

1998 – The Grand Princess cruise ship made its inaugural cruise. The ship weighed 109,000 tons and cost approximately $450 million, making it the largest and most expensive cruise ship ever built.

2020 – Protests that were triggered by the murder of George Floyd erupted in Minneapolis–Saint Paul, MN, before becoming widespread across the United States.

2020 – Governor Gretchen Whitmer said her husband was joking when he asked a boat contractor whether his status as Michigan’s “First Gentleman” would help him get his boat in the water ahead of the Memorial Day weekend.

Tags: A Look Back, Celebrity Birthdays, Days of the Year, May 26, Today in History