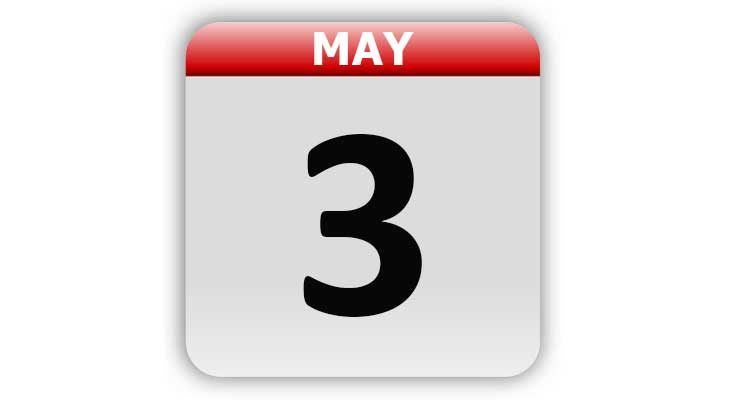 1802 – The city of Washington, DC was incorporated.

1933 – The U.S. Mint was under the direction of a woman for the first time when Nellie Ross took the position.

1944 – Wartime rationing of most grades of meats ended in the U.S.

1948 – TV’s “The CBS Evening News” debuted as a 15 minute nightly telecast. It has gone on to become the longest running network newscast.

1948 – The U.S. Supreme Court ruled that covenants prohibiting the sale of real estate to blacks and other minorities were legally unenforceable.

1952 – The Kentucky Derby was televised nationally for the first time on CBS.

1952 – Joseph Fletcher and William Benedict become the first people to land a plane at the North Pole.

1966 – The game “Twister” was featured on the “Tonight Show” with Johnny Carson.

1978 – Digital Equipment Corp. sent an unsolicited email to every west coast ARPANET address. It was the first SPAM email.

1992 – Five days of rioting and looting ended in Los Angeles, CA. The riots, that killed 53 people, began after the acquittal of police officers in the beating of Rodney King.

1999 – Mark Manes, at age 22, was arrested for supplying a gun to Eric Harris and Dylan Kleibold, who later killed 13 people at Columbine High School in Colorado.

1999 – Hasbro released the first collection of toys for the Star Wars movie “Episode I: The Phantom Menace.”

1999 – The southwestern portion of Oklahoma City, OK was destroyed by an F5 tornado that killed 45 people and injured 665. The storm caused $1 billion in damages. This tornado produced the highest wind speed every recorded at 301 +/- 20 miles per hour.

2000 – The sport of geocaching began. The first cache was placed with the coordinates from a GPS posted on Usenet.

2000 – The trial of two Libyans accused of killing 270 people in the bombing of Pan Am flight 103 (over Lockerbie) opened.

2002 – The movie Spider-Man, starring Tobey Maguire as Peter Parker, was released in theaters.

2006 – In Alexandria, VA, Al-Quaida conspirator Zacarias Moussaoui was given a sentence of life in prison for his role in the terrorist attack on the U.S. on September 11, 2001.

2007 – A videotape of a bombed David Hasselhoff sitting on the floor eating a hamburger, shirtless and in jeans, is aired by the TV shows “The Insider”, “Entertainment Tonight” and “Extra”.

2018 – A black bear wandered into a west side neighborhood in Grand Rapids, MI. He had climbed a tree. He was tranquilized by the DNR, and relocated to the wild near Houghton Lake, MI the same day.

Poem on Your Pillow Day

Tags: A Look Back, Celebrity Birthdays, Days of the Year, May 3, Today in History