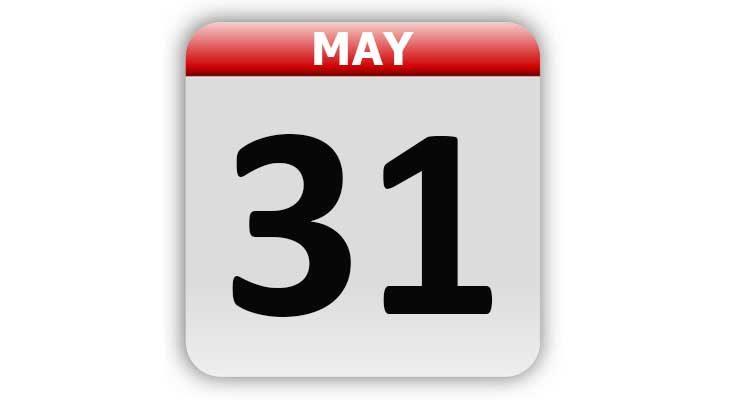 1859 – The clock tower at the Houses of Parliament, which houses Big Ben, started keeping time.

1879 – Gilmores Garden in New York, NY, was renamed Madison Square Garden by William Henry Vanderbilt and was opened to the public at 26th Street and Madison Avenue.

1880 – The first U.S. national bicycle society was formed in Newport, RI. It was known as the League of American Wheelman.

1907 – The first taxis arrived in New York, NY. They were the first in the United States.

1909 – The National Negro Committee, the forerunner to the National Association for the Advancement of Colored People (NAACP), held its first conference.

1913 – The 17th Amendment went into effect. It provided for popular election of U.S. senators.

1927 – Johnny Neun, first baseman for the Detroit Tigers, pulled off an unassisted triple play. He caught a line drive, tagged a runner who had left first base, and then tagged second base to catch a second runner.

1955 – The U.S. Supreme Court ordered that all states must end racial segregation “with all deliberate speed”.

1971 – In accordance with the Uniform Monday Holiday Act passed by Congress in 1968, observation of Memorial Day occurs on the last Monday in May for the first time, rather than on the traditional Memorial Day of May 30th.

1977 – The Trans-Alaska oil pipeline was finished after 3 years of construction.

1985 – The Stroh’s beer plant in Detroit closed. Stroh’s beer returned to stores and bars in Michigan in August of 2016, made by Brew Detroit through an agreement with Pabst Brewing Company.

1995 – Bob Dole singled out Time Warner for “the marketing of evil” in movies and music. He later admitted that he had not seen or heard much of what he had been criticizing.

1998 – “Derecho” winds accompanied thunderstorms that blew through West Michigan. Around 5 am that Sunday morning, the storms blasted through the area with winds estimated as high as 130 mph in Grand Haven and Walker. The storm caused damage from South Dakota to the east coast. According to the Storm Prediction Center, this episode ranks as one of the top thunderstorm events in world history!

1998 – Geri Halliwell, also known as “Ginger Spice” of the Spice Girls, confirmed she was leaving the group.

2003 – In North Carolina, Eric Robert Rudolph, who had been on the FBI’s 10 Most Wanted list for several bombings including the attack at the 1996 Atlanta Olympics, was apprehended after spending five years on the lam. He is also suspected of attacking abortion clinics and a gay nightclub.

2020 – After riots broke out in downtown Grand Rapids the night before, local residents headed downtown with brooms, shovels, and buckets and cleaned up the mess. Broken storefront windows were boarded up with sheets of plywood. Days later artists painted murals on those big pieces of wood.

National Save Your Hearing Day

Tags: A Look Back, Celebrity Birthdays, Days of the Year, May 31, Today in History