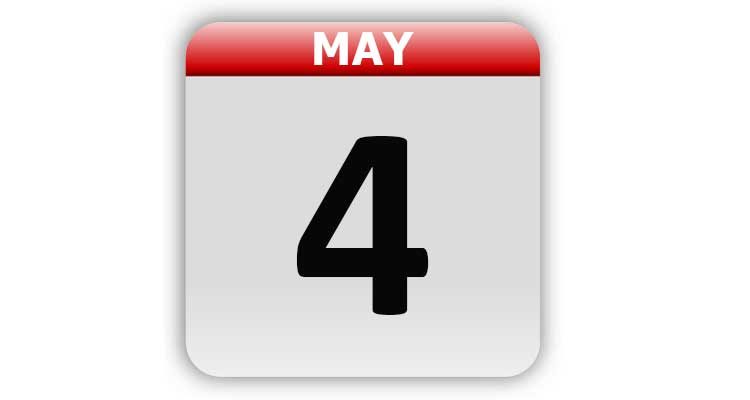 1776 – Rhode Island declared its freedom from England two months before the Declaration of Independence was adopted.

1886 – Chichester Bell and Charles S. Tainter patented the gramophone. It was the first practical phonograph.

1904 – The U.S. formally took control of the property for construction of the Panama Canal.

1905 – Belmont Park opened in suburban Long Island. It opened as the largest race track in the world.

1919 – A Major League Baseball game was played on a Sunday for the first time.

1927 – The Academy of Motion Picture Arts And Sciences, the organization that presents the Oscars, was founded.

1970 – The Ohio National Guardsmen opened fire on students during an anti-Vietnam war protest at Kent State University. Four students were killed and 11 others were wounded.

1973 – Elvis Presley opened a 13 night run at the Sahara Tahoe and drew a harsh review from “Variety”, which called him “30 pounds overweight, puffy, white-faced and blinking against the light. The voice sounds weak, delivery is flabby… and [he shows] no enthusiasm.”

1987 – Live models were used for the first time in Playtex bra ads.

1987 – The First Bank of the United States was listed as a National Historic Landmark.

1989 – Colonel Oliver North was convicted of three crimes and acquitted of nine other charges for his role in the Iran-Contra affair. The convictions were later overturned on appeal.

2001 – Bonny Lee Bakley, wife of Robert Blake, was shot to death inside the actor’s car, parked outside a Studio City, CA restaurant where the couple had just dined. Blake said he left his wife in the car and returned to the restaurant to retrieve a gun he had left there.

2003 – Idaho Gem was born. He was the first member of the horse family to be cloned.

2005 – After 10 weeks of testimony from more than 80 witnesses, prosecutors in the Michael Jackson child molestation trial rest their case.

2007 – Paris Hilton was sentenced to 45 days in jail for violating her probation. She was ordered to report to a women’s jail in Lynwood, CA by June 5th.

2007 – Greensburg, KS was almost completely destroyed by a 1.7 mile wide EF5 tornado. It was the first-ever tornado to be rated as such with the new Enhanced Fujita scale.

Tags: A Look Back, Celebrity Birthdays, Days of the Year, May 4, Today in History