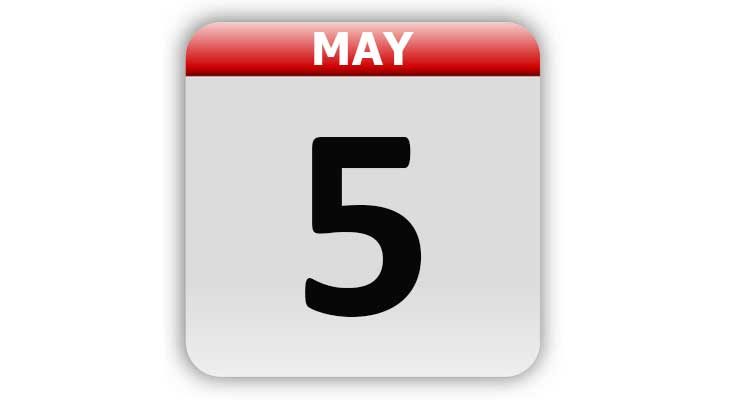 1809 – Mary Kies was awarded the first patent to go to a woman. It was for technique for weaving straw with silk and thread.

1862 – The Battle of Puebla took place. It is celebrated as Cinco de Mayo Day.

1865 – The Thirteenth Amendment was ratified, abolishing slavery in the U.S.

1904 – The third perfect game of the major leagues was thrown by Cy Young (Boston Red Sox) against the Philadelphia Athletics. It was the first perfect game under modern rules.

1921 – Coco Chanel debuted her first fragrance. It was called “Chanel No. 5”. Why was it called No. 5? In 1920, when she presented with small glass vials containing sample scents numbered 1 to 5 and 20 to 24 for her assessment, she chose the fifth vial.

1936 – Edward Ravenscroft received a patent for the screw-on bottle cap with a pour lip.

1952 – The “Vitameatavegamin” episode of TV’s “I Love Lucy” aired for the first time.

1961 – Alan Shepard became the first American in space when he made a 15 minute suborbital flight.

1966 – Willie Mays broke the National League record for home runs when he hit his 512th.

1994 – American teenager Michael P. Fay was caned in Singapore for theft and vandalism.

1997 – Dolores Hope received a star on the Hollywood Walk of Fame.

1997 – Ivan Reitman received a star on the Hollywood Walk of Fame.

1998 – The Michigan state legislature introduced a bill that would limit concert attendance by minors under the age of 18.

Hug a Shed and Take a Selfie Day

Revenge of the Fifth

Tags: A Look Back, Celebrity Birthdays, Days of the Year, May 5, Today in History