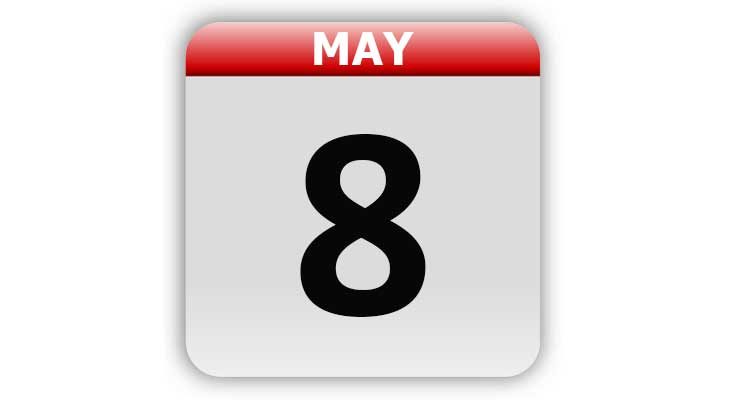 1847 – The rubber tire was patented by Robert W. Thompson.

1914 – The U.S. Congress passed a Joint Resolution that designated the second Sunday in May as Mother’s Day.

1919 – The first transatlantic flight took-off by a navy seaplane.

1921 – The world’s first riding lawnmower was introduced by the Ideal Power Mower Company of Lansing, MI. The mower company was sold to the Indian Motorcycle Co. in 1945.

1956 – Alfred E. Neuman appeared on the cover of “Mad Magazine” for the first time.

1958 – President Dwight Eisenhower ordered the National Guard out of Little Rock, AR, as Ernest Green became the first black to graduate from an Arkansas public school.

1976 – The rollercoaster “The New Revolution”, the first steel coaster with a vertical loop, opened at Six Flags Magic Mountain.

1980 – The World Health Organization confirmed the eradication of smallpox.

1984 – The Soviet Union announced that they would not participate in the 1984 Summer Olympics Games in Los Angeles, CA.

1986 – Reporters were told that 84,000 people had been evacuated from areas near the Chernobyl nuclear plant in Soviet Ukraine.

1997 – Larry King received a star on the Hollywood Walk of Fame.

1999 – The first female cadet graduated from The Citadel military college.

2020 – Golf carts were once again allowed on Michigan golf courses. They had been banned due to COVID-19 restrictions.

National Have A Coke Day

Time of Remembrance and Reconciliation

Tags: A Look Back, Celebrity Birthdays, Days of the Year, May 8, Today in History