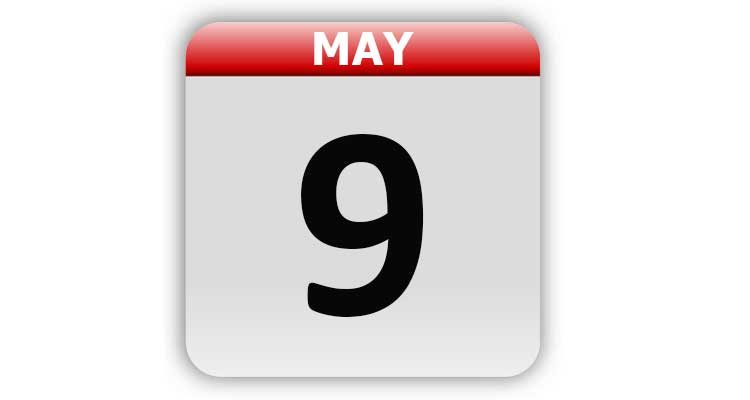 1754 – The first newspaper cartoon in America showed a divided snake “Join or die” in “The Pennsylvania Gazette.”

1926 – Americans Richard Byrd and Floyd Bennett became the first men to fly an airplane over the North Pole. Later discovery of Byrd’s diary appeared to cast some doubt on the claim.

1930 – A starting gate was used to start a Triple Crown race for the first time.

1936 – The first sheet of postage stamps of more than one variety went on sale in New York, NY.

1945 – U.S. officials announced that the midnight entertainment curfew was being lifted immediately.

1958 – Richard Burton made his network television debut in the presentation of “Wuthering Heights” on CBS-TV.

1960 – The U.S. Food and Drug Administration (FDA) approved for sale an oral birth-control pill for the first time.

1962 – A laser beam was successfully bounced off the Moon for the first time.

1980 – In Norco, CA, five masked gunmen held up a Security Pacific bank, leading to a violent shoot-out and one of the largest pursuits in California history. Two of the gunmen and one police officer were killed and 33 police and civilian vehicles were destroyed in the chase.

1980 – A Liberian freighter hit the Sunshine Skyway Bridge over Tampa Bay in Florida, making a 1,400 ft. section of the southbound span collapse. 35 motorists, in six cars and a Greyhoud bus, fell 150 ft. into the water and died.

1986 – Movie goers were introduced to Johnny Five when the movie “Short Circuit” opened in theaters.

1991 – Actor, director Michael Landon appeared on “The Tonight Show” to discuss the cancer which ultimately killed him.

1996 – In video testimony to a courtroom in Little Rock, AR, President Bill Clinton insisted that he had nothing to do with a $300,000 loan in the criminal case against his former Whitewater partners.

2020 – In Michigan, Expirations for driver’s licenses and vehicle registrations were extended to July due to COVID-19.

Time of Remembrance and Reconciliation

Tags: A Look Back, Celebrity Birthdays, Days of the Year, May 9, Today in History