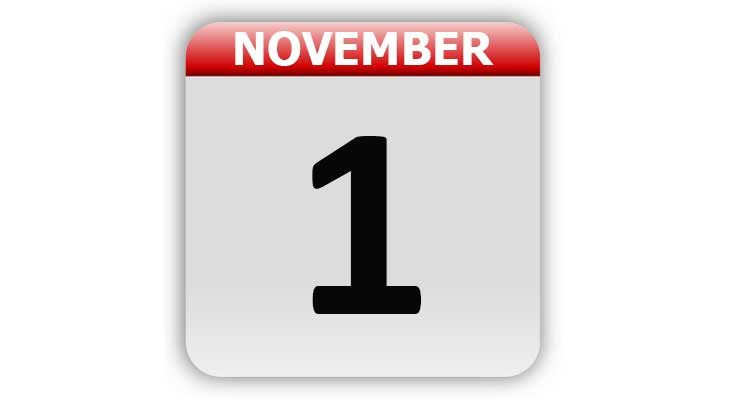 1512 – Michelangelo’s paintings on the ceiling of the Sistine Chapel were first exhibited to the public.

1800 – President John Adams became the first President to live in the White House when he moved in.

1870 – The Weather Bureau made its first official meteorological forecast. It later was renamed the National Weather Service.

1879 – Thomas Edison applied for a patent for his high-resistance carbon filament.

1894 – Thomas Edison filmed American sharpshooter Annie Oakley. The film was instrumental in her getting hired by Buffalo Bill for his Wild West Show.

1894 – “Billboard Advertising” was published for the first time. It later became known as “Billboard.”

1896 – A picture showing the bare breasts of a woman appeared in National Geographic magazine for the first time.

1930 – The Detroit-Windsor Tunnel was dedicated. It was the only underwater international border crossing.

1938 – Seabiscuit defeated War Admiral in an upset victory during a match race deemed “the match of the century” in horse racing.

1939 – The first rabbit born after artificial insemination was exhibited to the world.

1941 – Photographer Ansel Adams took a picture of a moonrise over the town of Hernandez, NM, that would become one of the most famous images in the history of photography.

1950 – Two Puerto Rican nationalists tried to assassinate President Harry Truman. One of the men was killed when they tried to force their way into Blair House in Washington, DC.

1957 – The Mackinac Bridge, the world’s longest suspension bridge between anchorages at the time, opened to traffic connecting the upper and lower peninsula of Michigan.

1959 – Montreal Canadiens goaltender Jacques Plante wore a protective mask and became the first goalie in the NHL to wear a mask.

1960 – While campaigning for President, John F. Kennedy announced his idea of the Peace Corps.

1973 – Interstate 75 was completed in Michigan. It is the state’s longest expressway covering 395 miles from the Ohio border to Sault Ste. Marie.

1973 – Leon Jaworski was appointed the new Watergate special prosecutor in the Watergate case.

1979 – A law went into effect in Michigan requiring vehicle owners to renew their license plates on their birthday.

1982 – Honda becomes the first Asian automobile company to produce cars in the United States when the opened their factory in Marysville, OH. The Honda Accord was the first car produced there.

1991 – Clarence Thomas was sworn in as the newest Justice on the U.S. Supreme Court.

1994 – The Amazon.com domain name was registered.

2003 – Reverend V. Gene Robinson was consecrated as the Episcopal bishop of New Hampshire. He’s the first openly gay man to reach that level in the Episcopal Church in America.

Day of the Dead

National Cook For Your Pets Day

Tags: A Look Back, Celebrity Birthdays, Days of the Year, November 1, Today in History