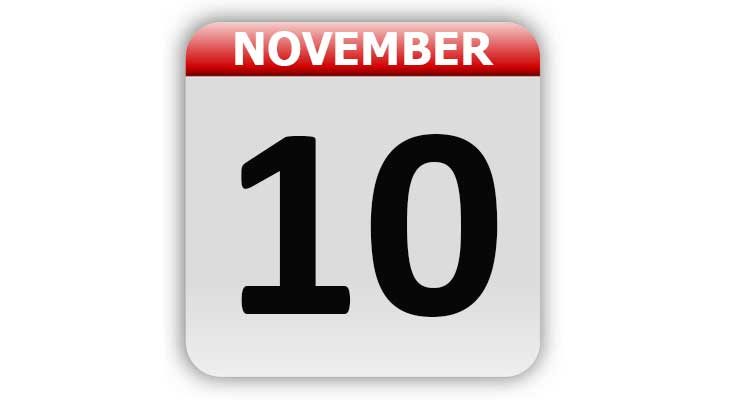 1775 – The U.S. Marines were organized under authority of the Continental Congress. (The Marines went out of existence after the end of the Revolutionary War in April, 1783. The Marine Corps were formally re-established on July 11, 1798.) This day is observed as the birth date of the United States Marine Corps.

1801 – The state of Tennessee outlawed the practice of dueling.

1951 – With the roll out of the North American Numbering Plan, the direct-dial, coast-to-coast telephone service began when Mayor M. Leslie Denning of Englewood, NJ, called his counterpart in Alameda, CA.

1958 – The Hope Diamond was donated to the Smithsonian Institution by New York diamond merchant Harry Winston. It was sent wrapped in paper as standard registered mail.

1969 – The television show “Sesame Street” aired for the first time on National Education Television (which would become PBS).

1970 – The Great Wall of China opened for tourism.

1975 – The Edmund Fitzgerald, a 729 foot long ore-hauling freighter, sank during a storm on Lake Superior, killing all 29 crew members on board.

1980 – CBS News anchor Dan Rather claimed he had been kidnapped in a cab. It turned out that Rather had refused to pay the cab fare.

1982 – The Vietnam Veterans Memorial was opened to visitors in Washington, DC.

1984 – Michael Jackson received a star on the Hollywood Walk of Fame.

1984 – The U.S. Postal Service issued a commemorative stamp of the Vietnam Veterans Memorial.

1988 – The U.S. Department of Energy announced that Texas would be the home of the atom-smashing super-collider. (The project was cancelled by a vote of Congress in October 1993.)

1989 – Germans began to tear down the Berlin Wall.

1993 – John Wayne Bobbitt was acquitted on the charge of marital sexual assault against his wife who sexually mutilated him.

1993 – The U.S. House of Representatives passed the Brady Bill, which called for a five-day waiting period for handgun purchases.

1995 – The movie “Ace Ventura: When Nature Calls” debuted in theaters.

1996 – Dan Marino, of the Miami Dolphins, became the first quarterback in NFL history to pass for more than 50,000 yards.

1997 – WorldCom and MCI Communications announced a $37 billion merger that was the largest merger in U.S. history at the time.

1999 – Ted Danson received a star on the Hollywood Walk of Fame.

2006 – The National Museum of the Marine Corps in Quantico, VA was opened and dedicated by President George W. Bush.

2008 – Over five months after landing on Mars, NASA declared the Phoenix mission concluded after communication with the lander was lost.

Tags: A Look Back, Celebrity Birthdays, Days of the Year, November 10, Today in History