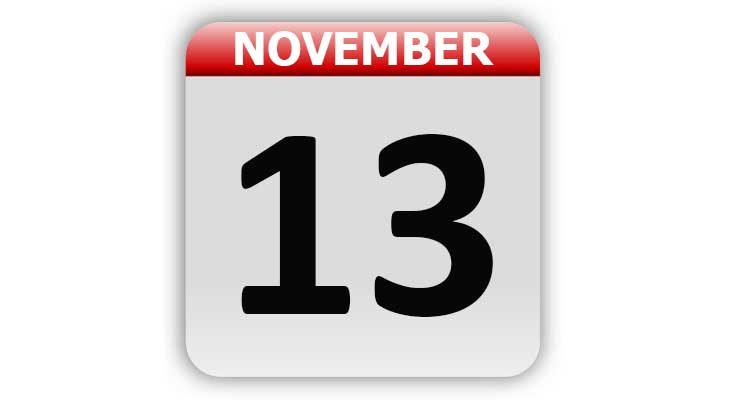 1789 – Benjamin Franklin wrote a letter to a friend in which he said, “In this world nothing can be said to be certain, except death and taxes.”

1927 – The Holland Tunnel opened to the public. It provided access between New York City, NY, and New Jersey beneath the Hudson River.

1970 – The Attorney General in Michigan ruled that funeral homes may not serve food or beverages.

1971 – The U.S. spacecraft Mariner 9 orbited around Mars to became the first spacecraft to orbit another planet.

1972 – The first lottery ticket was sold in Michigan to then Governor William Milliken.

1974 – Ronald DeFeo, Jr., murdered his entire family in Amityville, Long Island in the house that would become known as “The Amityville Horror”.

1982 – The Vietnam Veterans Memorial was dedicated in Washington, DC, after a march to its site by thousands of Vietnam War veterans.

1986 – President Ronald Reagan publicly acknowledged that the U.S. had sent “defensive weapons and spare parts” to Iran. He denied that the shipments were sent to free hostages, but that they had been sent to improve relations.

1990 – Patricia Boughton filed a lawsuit against singer Rod Stewart. She claimed that a football he kicked into the crowd during a concert at Pine Knob Music Theater ruptured a tendon in her middle finger. She said the injury made sex between her and her husband difficult.

1998 – Monica Lewinsky signed a book deal with St. Martin’s Press for the rights to her story about her affair with President Bill Clinton.

1998 – President Bill Clinton agreed to pay Paula Jones $850,000, without an apology or admission of guilt, to end her sexual harassment suit against him.

2000 – The Beatles compilation album “1” was released. It would become the best selling album of the decade.

2006 – A deal was finalized for Google Inc. to acquire YouTube for $1.65 billion in Google stock.

2009 – NASA announced that water had been discovered on the moon. The discovery came from the planned impact on the moon of the Lunar Crater Observation and Sensing Satellite (LCROSS).

Tags: A Look Back, Celebrity Birthdays, Days of the Year, November 13, Today in History