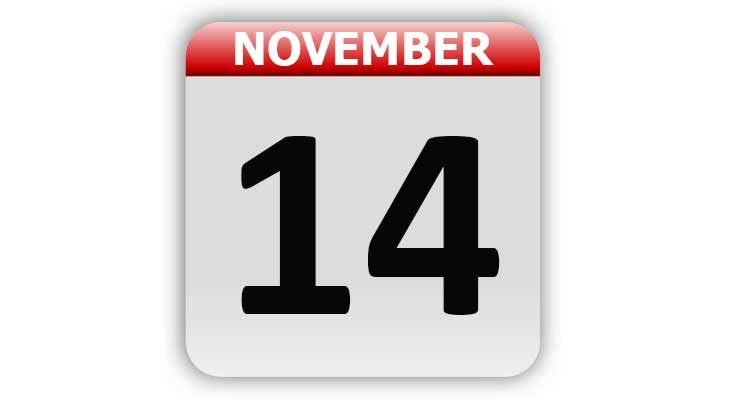 1832 – The first streetcar went into operation in New York City, NY. It was a horse-drawn vehicle and had room for 30 people.

1881 – Charles J. Guiteau’s trial began for the assassination of President James A. Garfield. Guiteau was convicted and hanged the following year.

1886 – Friedrich Soennecken filed his patent for his hole punch — a spring-supported lever system that makes holes in a stack of papers with ease.

1889 – Journalist Nellie Bly began her journey to go around the world in 80 days, inspired by Jules Verne’s novel. She completed her trip 72 days later. She traveled light…she took with her the dress she was wearing, a sturdy overcoat, several changes of underwear, and a small travel bag carrying her toiletry essentials.

1914 – John and Horace Dodge turned out the first Dodge automobile at their plant in Hamtramck, MI.

1969 – Apollo 12, the second crewed mission to the surface of the Moon, blasted off from Cape Kennedy, FL.

1979 – President Jimmy Carter froze all Iranian assets in the United States and U.S. banks abroad in response to the taking of 63 American hostages at the U.S. embassy in Tehran, Iran.

1993 – Michael Jackson went into drug rehab to deal with an addiction to painkillers.

1995 – A budget standoff between Democrats and Republicans in the U.S. Congress forced the federal government to temporarily close national parks and museums while most government offices operated with skeleton crews.

1997 – Ground was broken to start the construction of M-6 south of Grand Rapids, MI.

2002 – The second movie in the Harry Potter series, “Harry Potter and the Chamber of Secrets” hit theaters in North America.

2006 – Microsoft released the Zune to compete with Apple’s iPod.

2007 – A Las Vegas judge determined that O.J. Simpson and two co-defendants would stand trail for their involvement in the armed robbery of two sports memorabilia dealers in Las Vegas, NV, two months earlier.

2012 – The game Candy Crush Saga was released as a mobile app for smartphones.

Loosen Up, Lighten Up Day

Tags: A Look Back, Celebrity Birthdays, Days of the Year, November 14, Today in History