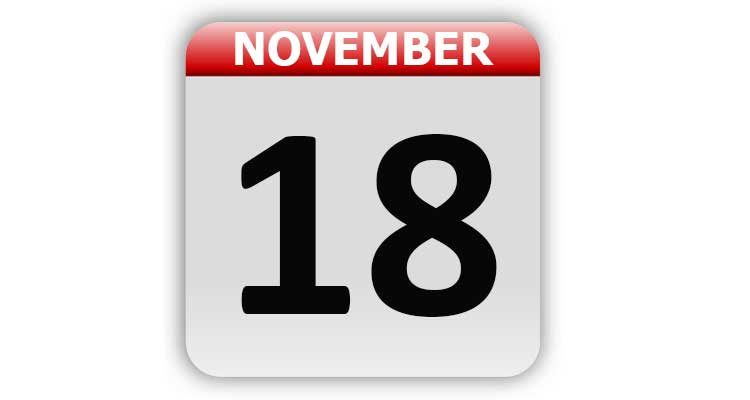 1820 – Captain Nathaniel Palmer became the first American to sight the continent of Antarctica.

1872 – Susan B. Anthony and 14 other women were arrested for illegal voting in the U.S. Presidential election.

1903 – The U.S. and Panama signed a treaty that granted the U.S. rights to build the Panama Canal.

1928 – The first successful animated cartoon with sound premiered in New York, NY. It was Walt Disney’s “Steamboat Willie,” starring Mickey Mouse. This is considered by the Disney Corporation to be Mickey’s birthday.

1966 – Roman Catholic bishops in the U.S. rescind the church rule against eating meat on Fridays.

1969 – Apollo 12 astronauts Charles “Pete” Conrad, Jr., and Alan L. Bean landed on the lunar surface during the second manned mission to the Moon.

1978 – In Jonestown, Guyana, Jim Jones led his Peoples Temple to a mass murder-suicide by drinking cyanide laced Kool-Aid. 918 people died in all, 909 of them in Jonestown, including over 270 children. Congressman Leo Ryan was murdered by members of the Peoples Temple hours earlier.

1980 – The first episode of the TV show “Barbara Mandrell and The Mandrell Sisters” debuted on NBC. Guest stars were Dolly Parton and John Schneider.

1983 – The classic holiday movie, “A Christmas Story”, premiered in theaters.

1987 – The U.S. Congress issued the Iran-Contra Affair report. The report said that President Ronald Reagan bore “ultimate responsibility” for wrongdoing by his aides.

1987 – CBS Inc. announced it had agreed to sell its record division to Sony Corp. for about $2 billion.

1988 – The animated Universal movie “The Land Before Time” premiered in theaters.

1993 – The North American Free Trade Agreement (NAFTA) was approved by the House of Representatives.

1997 – First Union Corp. announced its purchase of CoreStates Financial Corp. for $16.1 billion. To date it was the largest banking deal in U.S. history.

1999 – 12 people were killed and 28 injured when a huge ceremonial bonfire being constructed at Texas A&M University collapsed.

2011 – Regis Philbin appeared on his farewell episode of “Live! with Regis and Kelly”. After more then 28 years, Philbin, had logged more than 17,000 hours on television in a career that dates back to the 1960s

International Stand Up To Bullying Day

Tags: A Look Back, Celebrity Birthdays, Days of the Year, November 18, Today in History