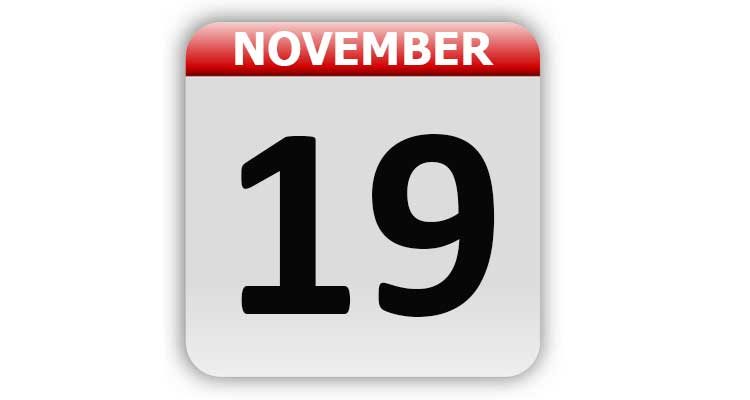 1850 – The first life insurance policy for a woman was issued to 36 year old Carolyn Ingraham in Madison, NJ.

1863 – While dedicating a national cemetery at the site of the Civil War battlefield in Pennsylvania, President Abraham Lincoln delivered his Gettysburg Address.

1893 – The first color supplement in a newspaper was published in the Sunday New York World.

1928 – “Time” magazine presented its cover in color for the first time. The subject was Japanese Emperor Hirohito.

1959 – Ford Motor Co. announced it was ending the production of the ill-fated Edsel.

1959 – The animated TV series “The Adventures of Rocky and Bullwinkle and Friends” aired it’s first episode on ABC.

1969 – Apollo 12 astronauts Pete Conrad and Alan Bean landed at Oceanus Procellarum (the “Ocean of Storms”) and became the third and fourth humans to walk on the Moon.

1975 – The movie “One Flew Over the Cuckoo’s Nest”, based on a 1962 novel  by Ken Kesey, premiered in theaters. It starred Jack Nicholson as Randle McMurphy, a new patient at a mental institution.

1979 – Nolan Ryan, of the Houston Astros, signed a four-year contract for $4.5 million. At the time, He became the highest paid player in major league baseball.

1990 – Milli Vanilli was stripped of their Grammy Award because they did not sing on the “Girl You Know It’s True” album. Session musicians had provided all the vocals.

1992 – The freshly restored Michigan Capital Building was re-opened. It was first built in 1879.

1997 – Septuplets were born to Bobbi McCaughey in Carlisle, IA, . It was only the second known case where all seven were born alive.

1998 – The impeachment inquiry of President Bill Clinton began over his relationship with Monica Lewinsky.

1998 – Vincent van Gogh’s “Portrait of the Artist Without Beard” sold at auction for more than $71 million.

1998 – Michelle Lee received a star on the Hollywood Walk of Fame.

2002 – While in Berlin, Germany to receive a Lifetime Achievement award, Michael Jackson made worldwide headlines when he dangled nine-month-old son Prince out his hotel window for photographers.

2002 – The U.S. government completed its takeover of security at 424 airports nationwide.

2007 – The Amazon Kindle was first released.

2007 – Michael Vick, the disgraced Atlanta Falcons quarterback, turned himself in to authorities in Richmond, VA, to begin serving his sentence for dog fighting charges.

2007 – More than 14 months after Daniel Smith dropped dead of an alleged drug overdose in his mother Anna Nicole Smith’s maternity room, the Bahamas finally launched its inquest into his death.

Ted Turner – 84 years old (1938) – Founder of CNN and the Goodwill Games, owned the Atlanta Braves and operates a chain of restaurants.

Have A Bad Day Day

Tags: A Look Back, Celebrity Birthdays, Days of the Year, November 19, Today in History