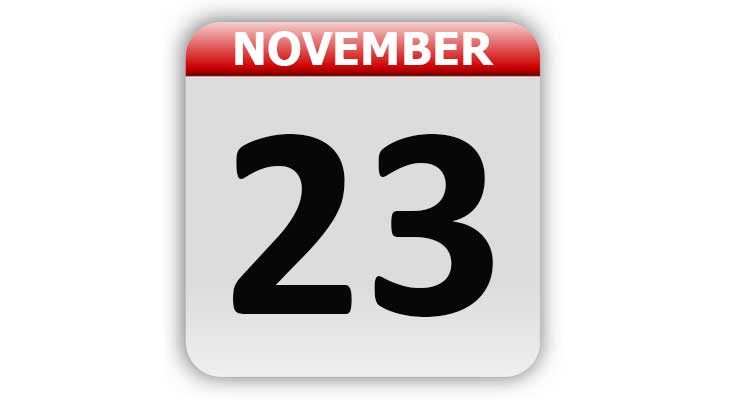 1887 – Notre Dame lost its first ever football game to the University of Michigan 8-0.

1889 – The world’s first jukebox was installed in the Palais Royale Saloon in San Francisco, CA.

1924 – Edwin Hubble’s discovery that the Andromeda “nebula” was actually another island galaxy far outside of our own Milky Way galaxy was first published in the New York Times.

1936 – “Life” magazine was reborn as a photo magazine and enjoyed instant success.

1953 – Pilot Felix Moncla and Lieutenant Robert Wilson disappeared while in pursuit of a mysterious craft over Lake Superior.

1958 – Husband and wife actors Ronald and Nancy Reagan appeared in the GE Theater television production “A Turkey for the President” on CBS.

1963 – The BBC broadcast the first episode of “An Unearthly Child”, the first story from the first series of “Doctor Who”, which is now the longest running science fiction drama.

1964 – In Fort Lauderdale, FL, the International Swimming Hall of Fame was founded.

1976 – Police arrested Jerry Lee Lewis outside the gates of Graceland, in Memphis, TN, after he showed up for the second time that night and made a scene by shouting, waving a pistol and demanding to see Elvis Presley.

1992 – The first smartphone, the IBM Simon, was introduced at COMDEX in Las Vegas, NV.

1995 – Charles Rathbun, free-lance photographer, was booked in Hermosa Beach, CA, for investigation of murder in the disappearance of model Linda Sobek. He was later convicted.

1996 – Digital pets arrived when the Tomagotchi became available in stores.

1998 – Dennis Rodman filed for an annulment from Carmen Electra after just 9 days of marriage. The two were married on November 14, 1998.

1998 – The tobacco industry signed the biggest U.S. civil settlement. It was a $206 billion deal to resolve remaining state claims for treating sick smokers.

2015 – Blue Origin’s New Shepard space vehicle became the first rocket to successfully fly to space and then return to Earth for a controlled, vertical landing.

National Tie One On Day

Tags: A Look Back, Celebrity Birthdays, Days of the Year, November 23, Today in History