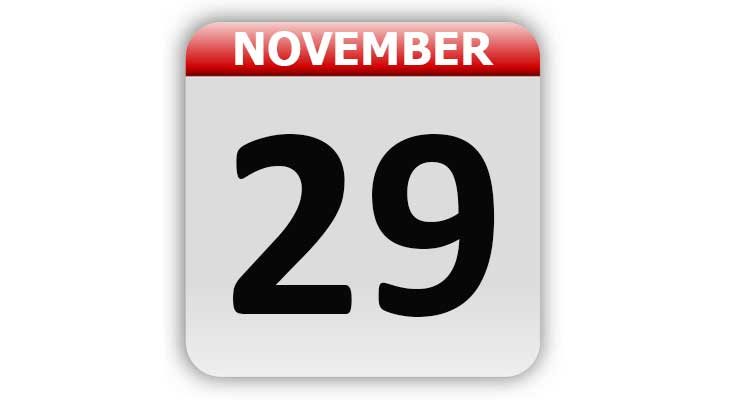 1760 – The French surrendered Michigan to the British.

1847 – Michigan’s first telegraph line was completed along the Michigan Central railroad tracks between Detroit and Ypsilanti.

1877 – Thomas Edison demonstrated his phonograph for the first time.

1892 – Almon Brown Strowger was issued a patent for the rotary dial.

1929 – The first airplane flight over the South Pole was made by U.S. Navy Lt. Comdr. Richard E. Byrd.

1959 – The Grammy Awards aired on NBC TV for the first time.

1961 – The Mercury-Atlas 5 spacecraft was launched by the United States with Enos the chimp on board. The craft orbited the earth twice before landing off Puerto Rico.

1963 – President Lyndon B. Johnson named a commission headed by Earl Warren to investigate the assassination of President John F. Kennedy.

1967 – U.S. Secretary of Defense Robert S. McNamara announced that he was leaving the Johnson administration to become President of the World Bank.

1969 – John Lennon was convicted of possession of cannabis and fined $360 in London. Yoko Ono, who was arrested with Lennon on October 18, was cleared of charges.

1971 – The Professional Golf Championship was held at Walt Disney World for the first time.

1975 – Bill Gates adopted the name “Microsoft” for the company he and Paul Allen had formed to write the BASIC computer language for the Altair.

1976 – Jerry Lee Lewis shot his bass player, Norman “Butch” Owens, twice in the chest while trying to hit a soda bottle. Lewis was charged with shooting a firearm within the city limits.

1979 – The original four members of KISS performed their last show together until 1996 when they reunited for a makeup tour.

1988 – The U.S. Supreme Court ruled that the rights of criminal defendants are not violated when police unintentionally fail to preserve potentially vital evidence.

1994 – The U.S. House passed the revised General Agreement on Tariffs and Trade.

2004 – Godzilla received a star on the Hollywood Walk of Fame.

Throw Out Your Leftovers Day

Tags: A Look Back, Celebrity Birthdays, Days of the Year, November 29, Today in History