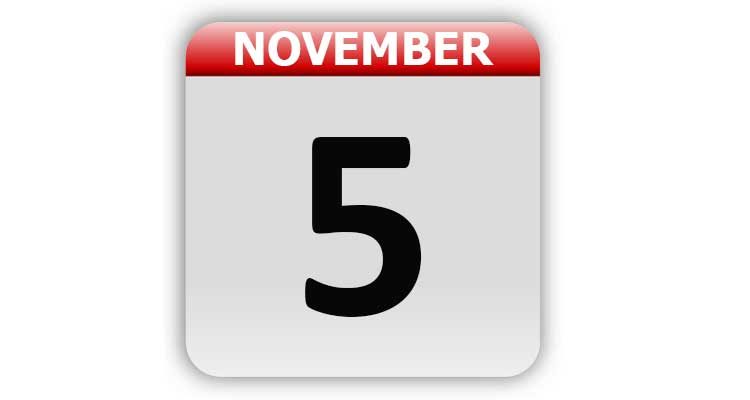 1844 – In California, a grizzly bear underwent a successful cataract operation at the Zoological Garden.

1872 – Susan B. Anthony was fined $100 for attempting to vote in the Presidential election. She never paid the fine.

1895 – George B. Selden received the first U.S. patent for a gasoline-powered automobile. Four years later he sold the rights for $200,000.

1918 – Women in Michigan were allowed to vote after the suffrage amendment was passed in the state legislature. Michigan became the 7th state to allow women to vote.

1940 – President Franklin Roosevelt was the first and only President to be elected to a third term in office.

1974 – Meteorologist Bill Steffen began forecasting West Michigan weather when he made his debut on WZZM TV-13. He is now the Chief Meteorologist at WOOD TV-8.

1984 – The U.S. Supreme Court ruled that the NFL had exceeded antitrust limits in attempting to stop the Oakland Raiders from moving to Los Angeles.

1992 – Malice Green, a black motorist, was beaten to death in Detroit during a struggle with police. Two officers were later convicted in his death and sentenced to prison for the crime.

1994 – Former President Ronald Reagan announced that he was suffering from Alzheimer’s disease.

1994 – George Foreman, age 45, knocked out Michael Moorer, age 26, in the 10th round of their WBA fight in Las Vegas, NV. With the victory, Foreman became boxing’s oldest heavyweight champion.

1996 – Bill Clinton was re-elected President of the United States.

2002 – Democrat Jennifer Granholm was elected as the first female Governor of Michigan.

2004 – The Disney/Pixar movie “The Incredibles” premiered in theaters.

2007 – Members of the Writers Guild of America went on strike shutting down production of more than 60 TV shows.

2007 – The Android mobile operating system was unveiled by Google.

2015 – Collins Dictionary declaired “binge-watch” to be their “Word of the Year”.

Tilda Swinton – 62 years old (1960) – Actress (“Michael Clayton”, “The Curious Case of Benjamin Button”, “Thumbsucker”, “Constantine”, “We Need to Talk About Kevin”, “The Chronicles of Narnia: The Lion, the Witch and the Wardrobe”, “The Beach”, “Orlando”)

Tags: A Look Back, Celebrity Birthdays, Days of the Year, November 5, Today in History