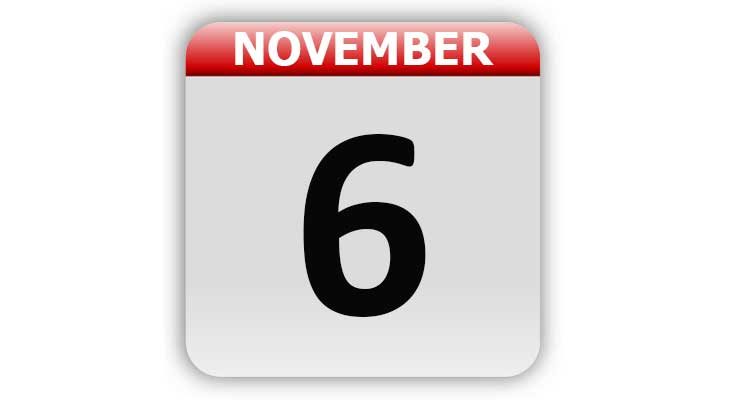 1860 – Abraham Lincoln was elected to be the 16nth President of the United States by defeating three other candidates.

1861 – Jefferson Davis was elected as the President of the Confederacy in the U.S.

1894 – William C. Hooker received a patent for the mousetrap.

1923 – Jacob Schick was granted a patent for the electric shaver.

1923 – The Ottawa Beach Hotel, which was the largest resort on the eastern shore of Lake Michigan, burned to the ground. The land became Holland State Park.

1928 – Herbert Hoover was elected as the 31st President of the United States.

1961 – In the Saraha Desert of Algeria, a natural gas well ignited when a pipe ruptured. The flames rose between 450 feet and 800 feet. The fire burned until April 28, 1962 when a team, led by Red Adair, used explosives to deprived the fire of oxygen.

1965 – The state of Michigan brought back turkey hunting. Four hundred hunters in Allegan County were able to try their luck.

1984 – For the first time in 193 years, the New York Stock Exchange remained open during a Presidential election day.

1990 – An arson fire destroyed about 20% of the Universal Studios backlot in southern California.

1995 – Art Modell, the owner of the Cleveland Browns, announced that he signed a deal what would relocate the team to Baltimore, MD to become the Baltimore Ravens. It would be the first time the city of Baltimore had a football team since 1983 when they were the Baltimore Colts.

2005 – The movie “Harry Potter and the Goblet of Fire” debuted in theaters.

2006 – Having shed 75 pounds, Kirstie Alley appeared on Oprah in a bikini.

2006 – Guy Fieri began taking us on tours of restaurants when the TV show “Diners, Drive-Ins and Dives” premiered.

2007 – For the first time in his Presidency, George W. Bush had one of his vetoes overturned. The House of Representatives voted 361-50 to override his veto of a $23 billion bill that would fund nearly 900 water projects across the nation. Up to this time, Bush had broken out his veto pen only five times.

2018 – Michigan voters decided to legalize marijuana for adult recreational use by a 56-44 percent margin.

Tags: A Look Back, Celebrity Birthdays, Days of the Year, November 6, Today in History