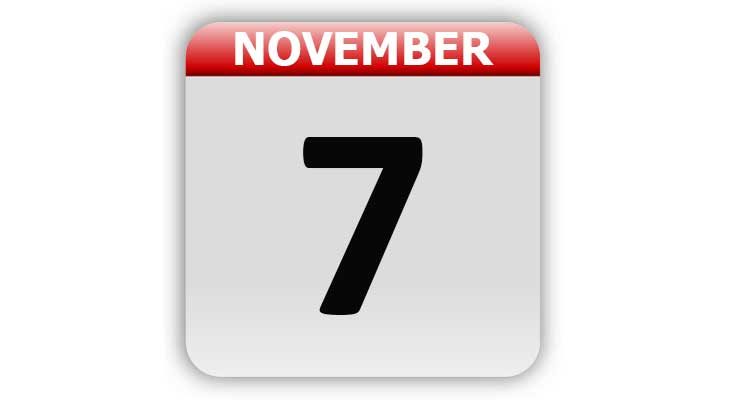 1874 – The Republican party was first symbolized as an elephant in a cartoon by Thomas Nast in “Harper’s Weekly”.

1893 – The state of Colorado granted its women the right to vote.

1910 – The first air freight shipment (from Dayton, OH to Columbus, OH) was undertaken by the Wright brothers and department store owner Max Moorehouse.

1913 – It was the first day of a multiple day storm surge and blizzard that came to be known as the deadliest storm in Great Lakes history. It was referred to by some as a freshwater hurricane with winds reaching hurricane force. Many ships were lost, damaged or grounded. The storm caused over $5 million in damages and 250 people lost their lives.

1916 – Woodrow Wilson was re-elected President of the United States.

1916 – Jeanette Rankin of Montana became the first woman elected to the U.S. Congress.

1940 – In Tacoma, WA, the original Tacoma Narrows Bridge collapsed in a windstorm, just four months after the bridge was completed.

1963 – Elston Howard, of the New York Yankees, became the first black player to be named the American League’s Most Valuable Player.

1972 – Richard Nixon was re-elected President of the United States.

1975 – The TV show “Wonder Woman”, starring Lynda Carter, debuted on ABC. The series would move to CBS for the second and third season.

1976 – The movie “Gone With The Wind” had its television premiere. It is still the 8th highest-rated primetime program off all time. Sixty-five percent of TV viewers tuned in to watch.

1991 – Magic Johnson announced that he had tested positive for the virus that causes AIDS and that he was retiring from basketball.

1991 – Actor Paul Reubens (Pee Wee Herman) pleaded no contest to charges of indecent exposure. He had been arrested in Sarasota, FL, for exposing himself in a theater.

2000 – The Presidential Election ended in controversy. It was later resolved and George W. Bush won over Al Gore to become the 43rd President of the United States.

2000 – Hillary Rodham Clinton made history as the first President’s wife to win public office. The state of New York elected her to the U.S. Senate.

2000 – The U.S. Drug Enforcement Administration discovered one of the country’s largest LSD labs inside a converted military missile silo in Wamego, KS.

2001 – After a 16-month stoppage, the Concorde resumed flying commercially.

2006 – The game “Guitar Hero II” for Playstation 2 was released in North America.

Tags: A Look Back, Celebrity Birthdays, Days of the Year, November 7, Today in History