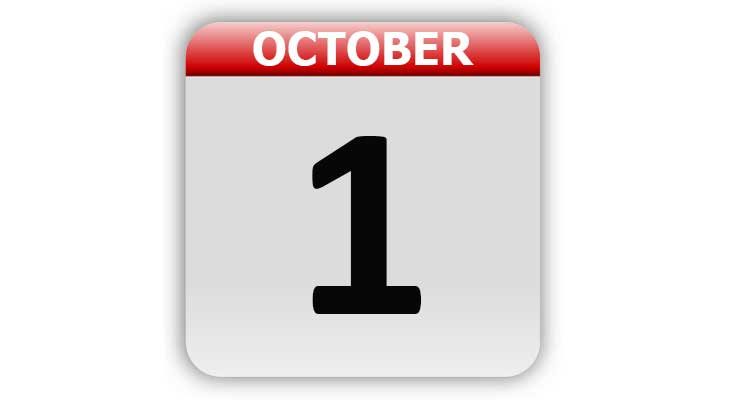 1836 – Michigan’s first railroad began operation. It was the Erie and Kalamazoo Railroad. Horses pulled the cars at 10 mph between Adrian, MI and Toledo, OH.

1885 – Special delivery mail service began in the United States. The first routes were in West Virginia.

1896 – Rural Free Delivery was established by the U.S. Post Office.

1903 – The Pittsburgh Pirates beat the Boston Pilgrims in the first World Series game.

1908 – The Model T automobile was introduced by Henry Ford. You could purchase one for $850.

1933 – Babe Ruth made his final pitching appearance — a complete game. He also hit a home run in the fifth inning.

1940 – The Pennsylvania Turnpike opened as the first toll superhighway in the U.S.

1946 – The first baseball play-off game for a league championship was played. It was a game between the St. Louis Cardinals and the Brooklyn Dodgers. The Cardinals beat the Dodgers 4-2.

1952 – The TV show “This is Your Life” began airing on NBC. The show was hosted by Ralph Edwards

1962 – Johnny Carson took over for Jack Paar as host of “The Tonight Show” on NBC. Carson hosted the show for 29 years.

1971 – Walt Disney World opened in Orlando, FL. The tourist attraction draws 52 million visitors per year from around the world.

1974 – The movie “The Texas Chainsaw Massacre” debuted in theaters. It has earned over $30.8 million in ticket sales.

1975 – The Thrilla in Manila: Muhammad Ali defeated Joe Frazier in a boxing match in Manila, Philipines.

1980 – Robert Redford became the first male to appear alone on the cover of “Ladies’ Home Journal.” He was the only male to achieve this in 97 years.

1995 – Jurors in the O.J. Simpson murder trial reached a verdict of “not guilty”. They deliberated for only four hours. The decision was made public the next day.

1995 – Nearly $1 million was raised at the Farm Aid concert in Louisville, KY. Musicians that performed were Willie Nelson, Neil Young, John Mellencamp, Hootie and the Blowfish, and The Dave Matthews Band.

1996 – A federal grand jury indicted Theodore Kaczynski in the 1994 “Unabomber” slaying of an ad executive.

1998 – John Fogerty received a star on the Hollywood Walk of Fame.

2001 – Mark McGwire retired from baseball on his 38th birthday.

2004 – After being dormant for almost 20 years, Mt. St. Helens erupted in a small explosion of steam and ash. No deaths, injuries or damage were reported.

2009 – David Letterman admitted on TV’s “The Late Show” that he had extramarital affairs with women he worked with at CBS.

2010 – The movie about Facebook, “The Social Network”, premiered in theaters.

Mark McGwire – 59 years old (1963) – Baseball player (Broke Roger Maris’s long-standing home run record in 1998, ending the season with 70, four ahead of Sammy Sosa. He may not reach the Hall of Fame due to admitted steroid use.)

Tags: A Look Back, Celebrity Birthdays, Days of the Year, October 1, Today in History