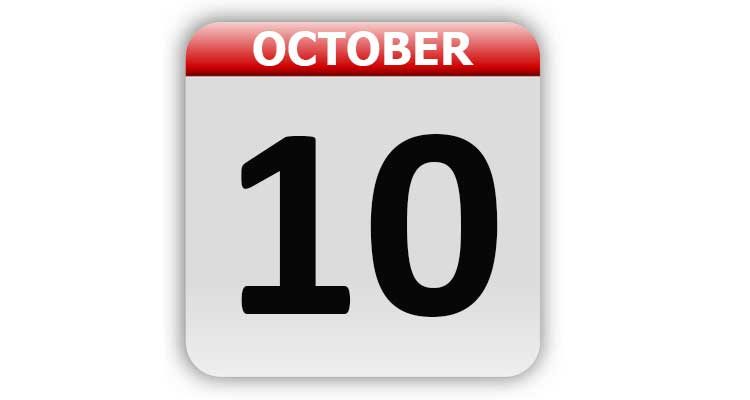 1846 – Triton, the largest moon of the planet Neptune, was discovered by English astronomer William Lassell.

1871 – The Great Chicago Fire in Chicago, IL. The fire was started from a barn accident and burned from October 8 to October 10.

1881 – Three Michigan railroads (Michigan Central; Detroit, Mackinac and Marquette; and the Grand Rapids and Indiana) formed a company to operate a railroad car ferry service across the Mackinac Straits.

1887 – The Edison Phonograph Company was founded by Thomas Edison.

1945 – The Detroit Tigers won their second World Series when they beat Chicago 9-3 in Game 7.

1964 – The opening ceremony of the Summer Olympics in Tokyo, Japan, was broadcast live in the first Olympic telecast relayed by geostationary satellite.

1965 – The Red Baron made his first appearance in the “Peanuts” comic strip.

1968 – Mickey Lolich pitched his third victory as the Detroit Tigers won Game 7 and the World Series over St. Louis.

1979 – Fleetwood Mac received a star on the Hollywood Walk of Fame. The city of Los Angeles declared it “Fleetwood Mac Day”.

1987 – Tom McClean finished rowing across the Atlantic Ocean in a record time of 54 days and 18 hours.

1995 – Gary Kasparov won a chess championship against Viswanathan Anand. The game lasted about a month.

2001 – President George W. Bush presented a list of the 22 most wanted terrorists.

2003 – Rush Limbaugh announced that he was addicted to painkillers and that he planned to check into a rehab center.

2018 – Hurricane Michael hit the panhandle of Florida with 155 m.p.h. winds. It was the third strongest storm ever to make landfall in the United States. Sixty people died in the storm.

National Walk to a Park Day

Tags: A Look Back, Celebrity Birthdays, Days of the Year, October 10, Today in History