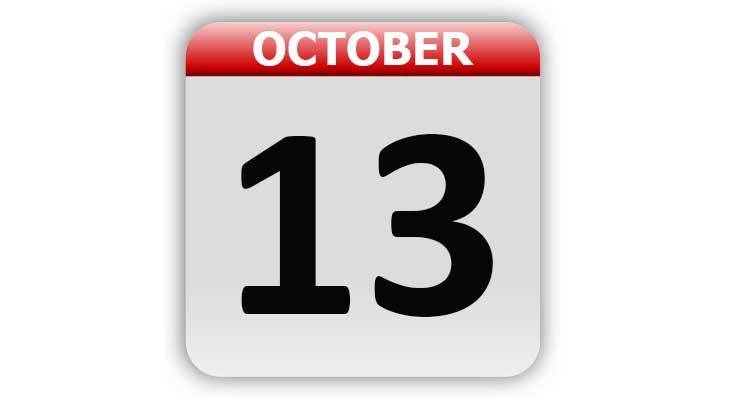 1775 – The U.S. Continental Congress ordered the construction of the Continental Navy (later renamed the U.S. Navy).

1792 – The cornerstone of the Executive Mansion was laid in Washington, DC. The name of the building was changed to “The White House” in 1818.

1836 – A group of New Yorkers settled on the Flat River and began a settlement which became Lowell, MI.

1951 – The post-pigskin era began. In Atlanta, GA, a football with rubber covering was used for the first time. Georgia Tech beats Louisiana State 25-7.

1958 – Paddington Bear, a character from English children’s literature, made his debut.

1967 – The first game in the history of the American Basketball Association was played as the Anaheim Amigos lost to the Oakland Oaks 134-129 in Oakland, CA.

1992 – An Air France SST set a commercial flight record by circling the Earth in 33 hours and 1 minute.

1992 – The U.S. Supreme Court decided not to reinstate lawsuits against Ozzy Osbourne alleging that his music prompted the suicide of two teenagers.

1998 – The National Basketball Association cancelled their regular season games, due to work stoppage. It was the first time they had cancelled games in their 51 year history.

1999 – Without handing down an indictment, a grand jury in Colorado finished its consideration of the unsolved 1996 murder of six-year-old Jon Benet Ramsey.

1999 – Philip Morris acknowledged cigarettes’ link to cancer and other diseases on their company website. The announcement was seen as a corporate public relations strategy.

2010 – In Copiapó, Chile 33 trapped miners made it to the surface after spending a record 69 days underground in a mining accident.

2019 – Kenyan Brigid Kosgei set a new world record for a woman runner with a time of 2:14:04 at the Chicago Marathon.

Tags: A Look Back, Celebrity Birthdays, Days of the Year, October 13, Today in History