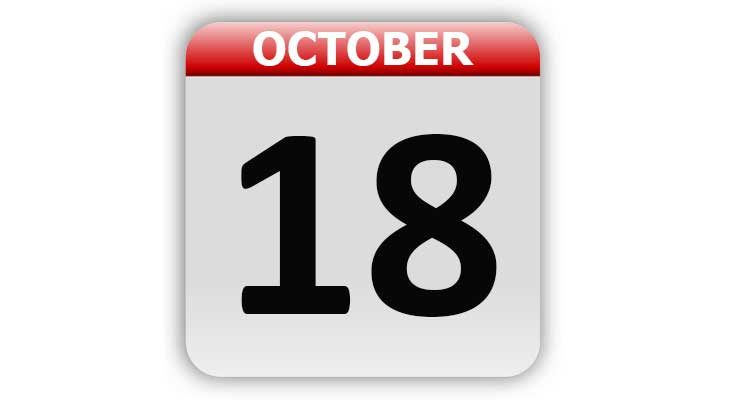 1767 – The Mason-Dixon Line, the boundary between Maryland and Pennsylvania, was established.

1851 – Herman Melville’s “Moby Dick” was first published as “The Whale” by Richard Bentley of London.

1867 – The U.S. took formal possession of Alaska from Russia. The land was purchased of a total of $7.2 million dollars (2 cents per acre).

1870 – The sand-blasting machine was patented.

1898 – The United States took possession of Puerto Rico from Spain.

1956 – NFL commissioner Bert Bell disallowed the use of radio-equipped helmets by NFL quarterbacks.

1961 – Henri Matisse’s “Le Bateau” goes on display at New York’s Museum of Modern Art. It is discovered 46 days later that the painting was hung upside down.

1967 – Walt Disney’s animated movie “Jungle Book” was released. It was the 19th Disney animated feature film and the last one to be produced by Walt Disney himself.

1967 – The American League granted permission for the A’s to move to Oakland. New franchises were also awarded to Kansas City and Seattle.

1969 – The F.D.A. banned artificial sweeteners, known as cyclamates, due to evidence they cause cancer in laboratory rats.

1977 – Reggie Jackson tied Babe Ruth’s record for hitting three homeruns in a single World Series game. Jackson was only the second player to achieve this.

1983 – General Motors agreed to hire more women and minorities for five years as part of a settlement with the Equal Employment Opportunity Commission.

1985 – Mario and Luigi made their debut in North America when Super Mario Bros and the NES gaming system was released.

1989 – The Space Shuttle Atlantis was launched on a mission that included the deployment of the Galileo Space Probe.

1991 – After a lengthy confirmation hearing, Supreme Court nominee Clarence Thomas swore to uphold the Constitution during an oath-taking ceremony at the White House.

1997 – A monument honoring U.S. servicewomen, past and present, was dedicated at Arlington National Cemetery.

2001 – An assistant to CBS News anchor Dan Rather tested positive for anthrax.

2019 – NASA Astronauts Jessica Meir and Christina Koch took part in the first all-female spacewalk when they ventured out of the International Space Station to replace a power controller.

Tags: A Look Back, Celebrity Birthdays, Days of the Year, October 18, Today in History