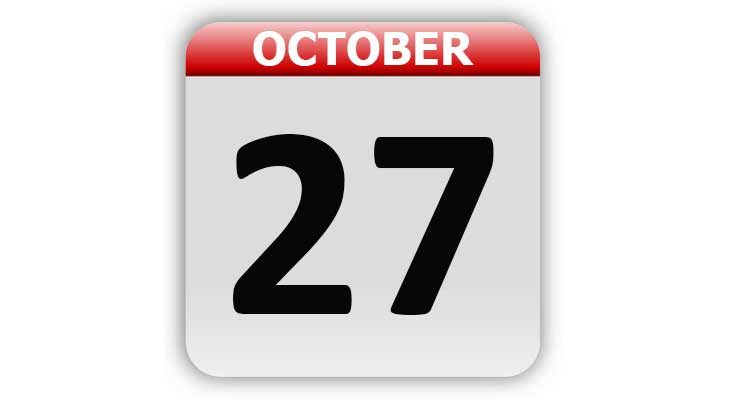 1925 – Fred Waller received a patent for his water skis.

1938 – DuPont announced “nylon” was the new name for its new synthetic fiber.

1947 – “You Bet Your Life,” the radio show starring Grouch Marx, premiered on ABC. It was later shown on NBC television.

1955 – The movie “Rebel Without a Cause”, starring James Dean, premiered in theaters.

1961 – NASA tested the first Saturn I rocket in Mission Saturn-Apollo 1.

1967 – The heaviest October snowstorm on record across Michigan occurred. On October 26, 1967, the snow began falling and by the next day, Grand Rapids had 8.4 inches, Lansing 7.5 inches and Muskegon had 4.9 inches. In the Upper Peninsula, Ironwood had a whopping 26.7 inches of new snow.

1975 – Bruce Springsteen was simultaneously on the cover of “Time” and “Newsweek.” This was the first time this happened for a rock star.

1994 – The U.S. Justice Department announced that the U.S. prison population had exceeded one million for the first time in American history.

1997 – Stock markets around the world crashed because of fears of a global economic meltdown. The Dow Jones Industrial Average dropped 554.26 points to 7,161.15. The stock market was shut down for the first time since the 1981 assassination attempt on President Ronald Reagan.

2001 – In Washington, DC, the search for anthrax widened to thousands of businesses and 30 mail distribution centers.

2003 – Bank of America Corp. announced it had agreed to buy FleetBoston Financial Corp. The deal created the second largest banking company in the U.S.

Tags: A Look Back, Celebrity Birthdays, Days of the Year, October 27, Today in History