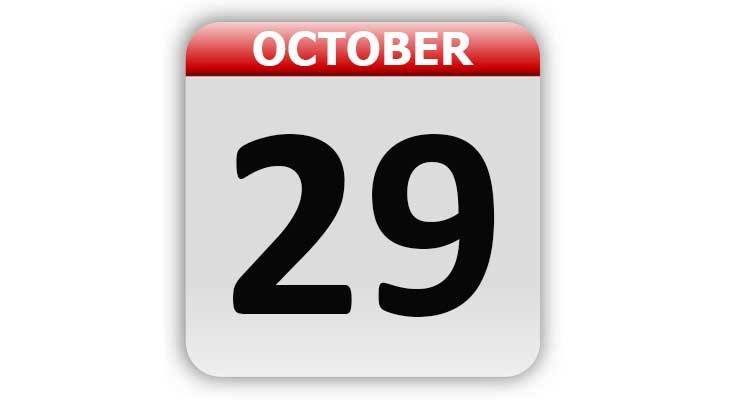 1682 – William Penn landed at what is now Chester, PA. He was the founder of Pennsylvania.

1833 – The first college fraternity was founded.

1863 – The International Committee of the Red Cross was founded.

1901 – Leon Czolgosz, the assassin of President William McKinley, was electrocuted.

1929 – The New York Stock Exchange crashed in what is called the Crash of ’29 or “Black Tuesday”, ending the Great Bull Market of the 1920’s and beginning the Great Depression.

1940 – The first peacetime military draft began in the United States.

1945 – The first ballpoint pens to be made commercially went on sale at Gimbels Department Store in New York, NY. They cost $12.50 each.

1947 – The first modern weather experiment, a cloud seeding operation dropped rain on New Hampshire and put out a forest fire.

1959 – General Mills became the first corporation to use close-circuit television.

1966 – The National Organization for Women was founded.

1969 – The first ever computer-to-computer link was established on ARPANET, the precursor to the internet. The message was supposed to say “login”, but the system crashed after just the first two letters.

1969 – The Supreme Court ordered an end to all school segregation “at once.”

1977 – A Boeing 747 set the speed record for flying around the world over the North and South Poles. The plane had an average speed of 487 mph.

1991 – The U.S. Galileo spacecraft made its closest approach to 951 Gaspra, becoming the first probe to visit an asteroid.

1993 – The Tim Burton clay-mation film “The Nightmare Before Christmas” premiered in theaters.

1994 – Francisco Martin Duran, of Colorado Springs, CO, fired more than two dozen shots from a semi-automatic rifle at the White House from Pennsylvania Ave. (He was later convicted of trying to assassinate President Bill Clinton.)

1998 – ATSC HDTV broadcasting in the United States was inaugurated with the launch of STS-96 Space Shuttle mission.

1998 – The Space Shuttle Discovery blasted off with 77 year old John Glenn on board. (In 1962 he became the first American to orbit the Earth.) He became the oldest person to go into space.

2008 – Delta Air Lines merged with Northwest Airlines to create the world’s largest airline while reducing the number of U.S. legacy carriers to five.

2012 – Hurricane Sandy made landfall in Atlantic City, NJ and was re-classified as a post-tropical cyclone. New Jersey, New York and Connecticut were hardest hit. A total of eight-million people lost power, 148 died directly and 138 indirectly due to the storm. An estimated $82 billion in damages made Sandy the second costliest hurricane in American history at the time (after Katrina).

2014 – The smartwatch Microsoft Band was released.

2015 – China announced the end of their one child policy after 35 years.

Tags: A Look Back, Celebrity Birthdays, Days of the Year, October 29, Today in History