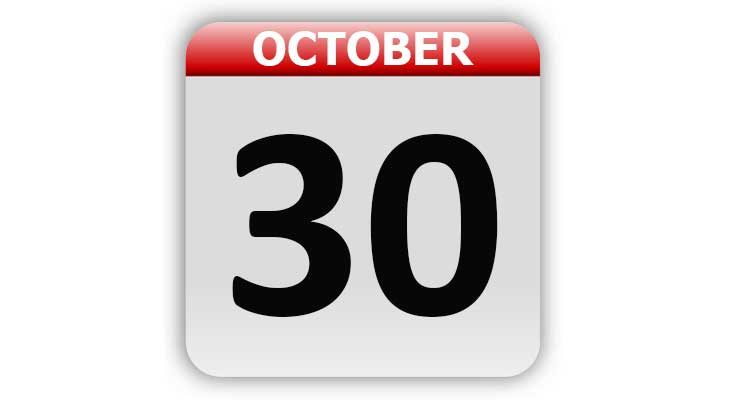 1894 – The time clock was patented by Daniel M. Cooper of Rochester, NY.

1938 – Orson Welles broadcast his radio play of H.G. Wells’ “The War of the Worlds” on CBS radio, convincing many listeners that a Martian invasion was really happening.

1945 – Jackie Robinson, of the Kansas City Monarchs, signed a contract with the Brooklyn Dodgers, breaking the baseball color line.

1945 – The U.S. government announced the end of wartime shoe rationing.

1970 – Jim Morrison was sentenced to 6 months in jail and fined $500 for exposing himself in Miami, FL. He was also sentenced to 60 days of hard labor for using profanity. He was released on $50,000 bond until the appeal could be heard.

1972 – In Illinois, 45 people were killed and 332 were injured when two trains collided on Chicago’s south side.

1974 – The Rumble in the Jungle boxing match between Muhammad Ali and George Foreman took place in Kinshasa, Zaire. Ali won by a knock out in the 8th round, regaining the World Heavyweight Champion title and giving Foreman his first professional defeat.

1985 – The Space Shuttle Challenger lifted off for mission STS-61-A, its final successful mission.

1987 – In Japan, NEC released the first 16-bit video game console, the PC Engine. It was later sold in other markets with the name TurboGrafx-16.

2001 – In New York, NY, President George W. Bush threw out the first pitch at Game 3 of the World Series between the New York Yankees and the Arizona Diamondbacks.

2001 – Michael Jordan returned to the NBA with the Washington Wizards after a 3-1/2 year retirement.

Ivanka Trump – 41 years old (1981) – The daughter of Donald and Ivana Trump has regularly helped out on his reality TV show, “The Apprentice”

National Speak Up For Service Day

Tags: A Look Back, Celebrity Birthdays, Days of the Year, October 30, Today in History