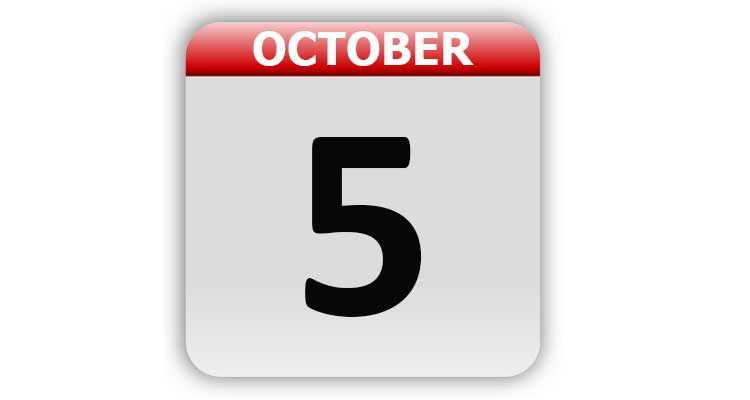 1904 – The Ryerson Library in Grand Rapids, MI was dedicated after the Grand Rapids Public Library received a gift from Martin Antione Ryerson (grandson of Louis Campau).

1921 – The World Series was broadcast on the radio for the first time. The teams playing were the New York Giants and the New York Yankees.

1931 – Clyde Pangborn and Hugh Herndon landed in Washington after flying non-stop across the Pacific Ocean. The flight originated in Japan and took about 41 hours.

1947 – President Harry S. Truman made the first televised address from the White House, speaking about an international food crisis.

1955 – Disneyland Hotel opened to the public in Anaheim, CA.

1962 – The movie “Dr. No”, the first in the James Bond film series, was released, starry Sean Connery as James Bond.

1966 – There was a partial core meltdown at the Enrico Fermi demonstration nuclear breeder reactor near Detroit, MI.

1974 – After four years and 21 pairs of shoes, American David Kunst completed the first journey around the world on foot. He crossed four continents and walked 14,450 miles.

1982 – Johnson & Johnson initiated a nationwide recall in the U.S. for all products in its Tylenol brand after several bottles in Chicago, IL, were found to have been laced with cyanide. Seven people died.

1990 – A jury in Cincinnati, OH acquitted an art gallery and its director of obscenity charges stemming from an exhibit of sexually graphic photographs by Robert Mapplethorpe.

1998 – Margaret Ray, the woman who famously stalked David Letterman, committed suicide by kneeling in front of an oncoming train in Colorado.

1999 – Kevin Spacey received a star on the Hollywood Walk of Fame.

2001 – A photo editor at Florida’s American Media becomes the first person to die from anthrax in a still-unsolved terror campaign.

2006 – Walmart rolled out its $4 generic drug program to the entire state of Florida after a successful test in the Tampa area.

Balloons Around the World Day

National Coffee with a Cop Day

National Do Something Nice Day

Tags: A Look Back, Celebrity Birthdays, Days of the Year, October 5, Today in History