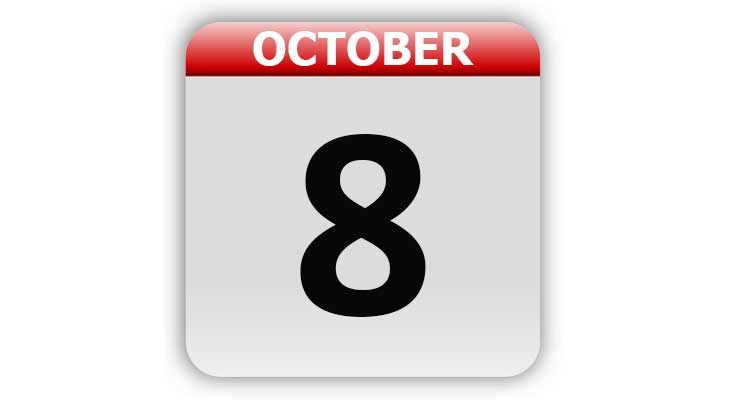 1871 – Four major fires broke out on the shores of Lake Michigan in Chicago, IL; Peshtigo, WI; Holland, MI; and Manistee, MI including the Great Chicago Fire, and the much deadlier Peshtigo Fire. A fire destroyed most of the city of Holland, MI. Hope College and the First Reformed Church survived. It was estimated that 90% of the homes in Holland were destroyed.

1938 – The cover of “The Saturday Evening Post” portrayed Norman Rockwell.

1945 – A patent was filed for a cooking process using microwaves. The first commercial unit that was available was almost 6 feet tall and weighed 750 lbs. It was called the “Radarange” and cost about $5,000.

1945 – President Truman announced that only Britain and Canada would be given the secret to the atomic bomb.

1952 – “The Complete Book of Etiquette” was published for the first time.

1957 – The Brooklyn Baseball Club announced that it had accepted a deal to move the Dodgers to Los Angeles.

1966 – The U.S. Government officially declared that LSD was dangerous and an illegal substance.

1987 – Chuck Berry was given a star on the Hollywood Walk of Fame.

1993 – The U.S. government issued a report absolving the FBI of any wrongdoing in its final assault on the Branch Davidian compound in Waco, TX. The fire that ended the siege killed 85 people.

2001 – Rush Limbaugh announced to his listeners that he was totally deaf in his left ear and had only partial hearing in his right ear. The condition had appeared in a three month period.

2001 – Two Russian cosmonauts made the first spacewalk to be conducted outside of the International Space Station without a shuttle present.

2003 – Vietnam and the United States reached a tentative agreement that would allow the first commercial flights between the two countries since the end of the Vietnam War.

2003 – It was announced that Vivendi Universal and General Electric Co. had reached an agreement to merge. The name for the combined company is NBC Universal.

2003 – Siegfried Fischbacher and his manager announced that the “Siegfried and Roy” show at the Mirage Hotel in Las Vegas, NV was canceled permanently.

2004 – Three years after selling off a some of her ImClone stock, Martha Stewart checked into a minimum security federal women’s prison in Alderson, WV.

2007 – After admitting that she used steroids, Olympic sprinter Marion Jones returned the three gold and two bronze medals she won at the 2000 games in Sydney, Australia.

2020 – Seven men were charged for plotting to kidnap Governor Gretchen Whitmer from her vacation home.

Tags: A Look Back, Celebrity Birthdays, Days of the Year, October 8, Today in History