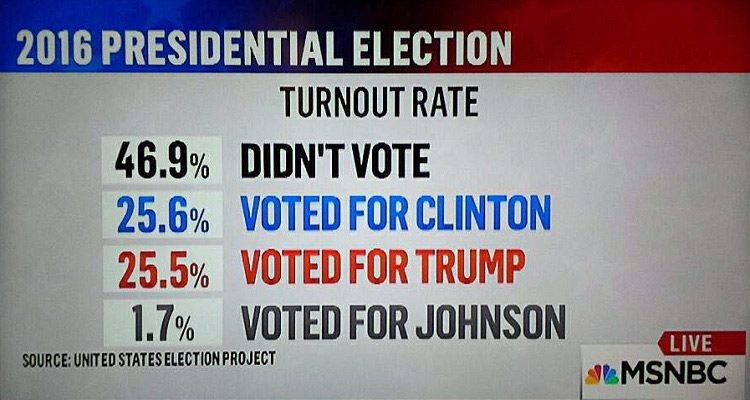 The Presidential Election — By the Numbers

Now that we have more confirmed statistics, it is fun to look back at the Presidential Election and take a look at the numbers…

I saw the above graphic from MSNBC that broke down the percentage of votes, and just where they went…

(That information came from the United States Elections Project)

I did a little further investigation, because I wanted to know how many people that 46.9% represented. Was it registered voters or just people who were eligible to vote — whether they had registered or not?

So off to the internet to do some research…

According to TargetSmart, a Democratic political data firm, there are 200,081,377 registered voters in the United States (as of October, 2016).

If you total up the popular vote numbers…

That means that there are 74,020,374 registered voters who did not make it to their polling place to cast a vote…that means only 63% of registered voters took the opportunity to cast a vote. (OK, I’ll allow some discrepancies in the numbers for perhaps any absentee ballots or early voting that possibly weren’t included in the over numbers of those that voted.)

Imagine the possibilities if a higher percentage of registered voters actually voted! And to anyone who is complaining or protesting…did YOU vote?

A friend posted the following on Facebook today (here is part of it):

I am a Citizen of the United States of America, born in 1964.

I have voted in every election in which I was eligible since I turned 18.

I am honored by the sacrifice of men and women over our history to preserve my right to vote and participate in government, and my right to seek out my own destiny and to express my freedom of religion and speech so long as my actions respect the boundaries of other’s freedoms and rights.

Some of these Presidents I admired, some I did not like, but I understand they played an important part in the preservation of freedom, and the will of the People, even if some of their policies were not the best for me, and even if I did not vote for them.

We all have an obligation, for whatever reasons we find ourselves here, to participate in the process and to work together towards a more perfect union.

Thanks Kip, I couldn’t have written it any better!