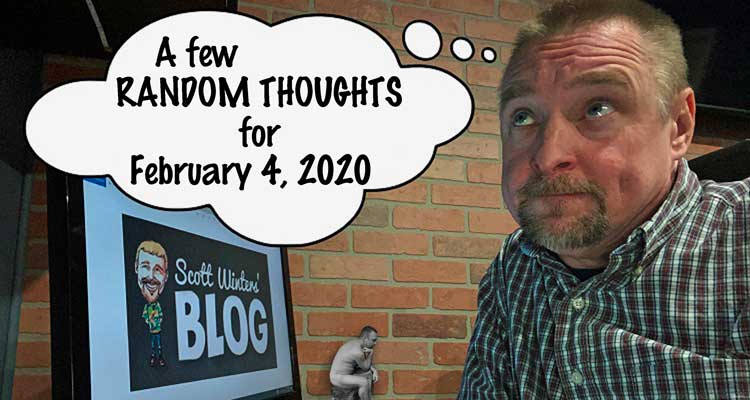 Welcome to Tuesday. Are you ready for some “Random Thoughts”?

On Monday, at the end of his national radio program, Rush Limbaugh announced that he has advanced lung cancer.

In his statement he said he debated as to whether or not to tell his audience. He made the announcement to let his listeners know that he will be missing upcoming days from his show as he begins his treatment.

Regardless if you love or hate him, thoughts and prayers go out to Rush. Cancer is something I would not wish on anyone.

To read more about Rush’s announcement, here is a story from Fox News.

Shannen Doherty revealed today on “Good Morning America” that her breast cancer is back and is now in stage 4.

The “Beverly Hills 90210” star, who was diagnosed with breast cancer in 2015, had been in remission since 2017. She says she’s known for about a year but kept it private, telling only those she is close with.

Shannen told GMA, “I don’t think that I’ve processed it. It’s a bitter pill to swallow in a lot of ways. I definitely have days where I say, ‘Why me?’ And then I go, ‘Well, why not me? Who else besides me deserves this?’ None of us do.”

Here is the article and video from “Good Morning America”.

TAKE A BITE OUT OF THE MAYOR

On Sunday, Punxsutawney Phil, was pulled from his nice warm burrow in Pennsylvania to predict when spring will arrive.

I’ve always wondered why Phil just didn’t take a chunk of flesh off the hand that reaches and in wakes him up.

Many other cities have their own groundhogs that they turn to for the spring forecast.

Back in 2015 in Sun Prairie, Wisconsin, a local groundhog was held up to the ear of the town’s mayor so that he could deliver his forecast and it didn’t turn out well. The groundhog bit the major’s ear!

Here is the video…

Maybe we should just leave the forecasting to our local meteorologists. There would probably be less blood!

MADONNA IS BEING SUED FOR BEING LATE

Madonna’s concert tour has had it’s share of problems. Stating health concerns, she has cancelled several performances. The concerts that actually go on are sometimes delayed with Madonna showing up 2-3 hours late for her own concert.

Two men have now filed suit against Madonna for starting her concerts more than two hours behind schedule. They’ve demanded damages for “breach of contract, false advertisement and negligent misrepresentation.”

According to court documents, the scheduled start time for the Madame X shows was 8:30 p.m. One of the nights that Andrew Panos and Antonio Velotta bought tickets, Madonna arrived at 11:30!

The men claim their nights were ruined waiting so long for Madonna to take the stage. Public transportation closed before Madonna’s encore, and the guys couldn’t arrange alternative rides because their “phones were confiscated at the show”. The men arrived home so late that they overslept the next day for work.

Any performing artist this is consistently late for their shows is just being rude to their fans.

On Monday I brought up the idea of “No Children” sections at restaurants.

In the past when I have discussed this topic I have had a lot of resistance. I expected the same this time, but decided to put together a poll to see how my “Random Thoughts” readers felt.

Much to my surprise 91% of the people who took part in the poll agreed with me!

So restaurant owners…is it maybe time to start thinking about that “No Children” section!?

On February 4th, 2004, the social networking website Facebook.com was launched by Harvard student Mark Zuckerberg. It was originally called “Thefacebook”.

Have a TERRIFIC Tuesday! I will talk to you this afternoon from 3-7 pm on 98.7 WFGR!