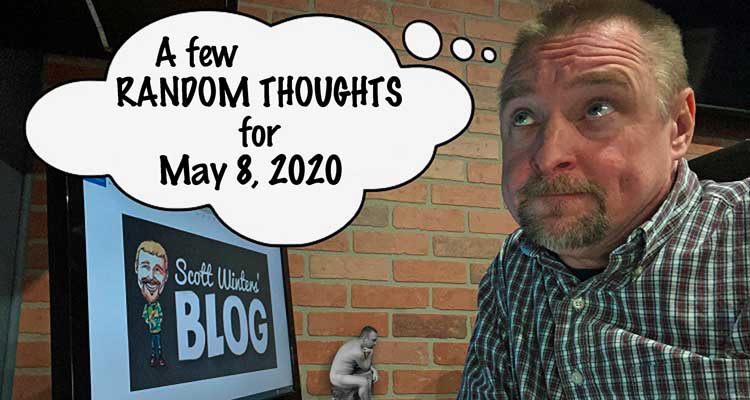 We’ve almost made it through another week! Here are my “Random Thoughts” for Friday…

According to the website put together by the Michigan Department of Health and Human Services, as of Thursday afternoon at 3 pm there are 45,646 confirmed cases of COVID-19 in the state of Michigan. That number jumped up by 592 in 24 hours.

We are now to stay at home until Thursday, May 28th. You can read the complete Executive Order here.

And yes, I’m counting…since the start of all of this, the Govenor has issued 73 different Executive Orders. If you need some reading material, here is the list of all the links for each Executive Order, dating back to March.

As I predicted a month or so ago, I think this is going to go well into June. I still think that “Independence Day” is going to take on whole new meaning for us this July 4th.

I’ve mentioned this before, but I’ll say it again…

Although the numbers the Governor and the state keep giving us are not inaccurate, they are not being represented correctly.

They continue to give us the number of positive new cases being reported every day. However, they fail to mention how many more people are being tested on a daily basis.

If they were administering the same exact amount of tests every day, we could use that total number of positive cases number as a reference point as to how the curve is going.

However, they fail to mention that they are now testing about 10,000 people a day. That number is double the number of tests that were being done on April 1st.

So while the positive cases number may appear to be growing and is factual, we should also realize that the total number of tests has doubled.

We should be looking at the percentage of positive tests…

On April 1st, 40.7% of the tests administered came back positive. On May 5th, 8.6% of the tests returned with a positive result. That’s a difference of 32.1%. That to me is quite an accomplishment, but it looks like officials would rather just panic us and tell us that hundreds of new cases are being reported everyday.

Keep in mind the red line is the number of confirmed cases. That number is a cumulative total and will NEVER go downward.

When looking at the blue bar graph of total daily cases, keep in mind they aren’t referencing the total number of tests being administered. Basic statistics will tell you the bigger the sample rate (amount of tests being given) the more positive cases you will have. For example if you test 10 people and one person tests positive that’s 10% of those tested that come back positive. If you test 100 people and that same 10% come back confirmed, that’s 10 people. Sure, 10 is more than 1 in the two separate testing examples, but the percentage of those being tested that come back positive remains the same.

A TRIP BACK IN TIME

On Saturday I plan to take a trip back in time.

It will be for an essential item that the Governor has granted us permission to travel for. She just (as yet) has not put a limit on how far of a distance we can travel. Don’t worry, I will be in my car and adhering to all “social distancing” guidelines the entire time.

I’ll explain it all in Sunday’s “Random Thoughts”. Stay tuned!

LAST CHANCE TO WIN SOME CASH

For about the last month, we have been giving away money on 98.7 WFGR.

Every day we have handed out $1,000 three times throughout the day.

Today is the last day of the giveaway. I will have your final chance to win this afternoon at 4:30 pm. Listen for details.