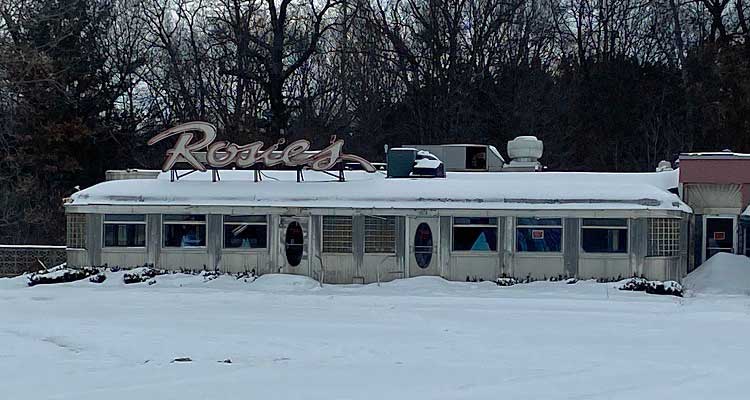 There was a time when people would make the drive to Rockford, Michigan to have a meal at Rosie’s Diner. Those days are long gone. It’s sad to see how over the years this destination has gone from a favorite — to scrap metal.

The restaurant was originally known as the “Silver Dollar Diner” in Little Ferry, New Jersey. it was built in 1946 by the Paramount Dining Car Company. and first opened in the 1940s.

The diner was used as the setting for quite a few TV commercials over the years. One commercial was for for Sanka coffee and another was for Pepsi in the earlier days of the restaurant. Other companies like Ethan Allen Furniture and Sony also used the New Jersey diner location for their advertisements. The diner was made most famous by the Bounty paper towel commercials that were filmed inside the diner during the 1970s. It the ads, clumsy patrons would knock over beverages, and Rosie the Waitress (played by Nancy Walker), would clean up the mess using Bounty paper towels — the “quicker picker-upper”.

Here is one of those Bounty commercials…

The diner’s owner, Ralph Corrado Jr., sold the land that the diner sat on to an auto glass store that was located right next door. The new owners did not want the diner. He offered “the most famous diner in America” to the Smithsonian Institution but they rejected his offer.

Michigan artist Jerry Berta had been producing ceramic replicas of classic diners. The original Rosie’s was one of his inspirations. When he found out that the New Jersey diner was for sale, he purchased the diner and moved it to it’s 14 Mile Road location in Rockford, Michigan. Berta paid $10,000 for the 24-by-60-foot building. Work crews sawed the diner in half the week after it closed in 1990 in New Jersey, and then loaded it on flatbed trucks for the move to Michigan. The restaurant opened in its new location on July 5, 1991.

Rosie’s Diner was featured in the 12th episode of the first Season of “Diners, Drive-Ins, and Dives”, with host Guy Fieri, on July 30th, 2007.

Here is the video (although the quality isn’t that great)…

Sadly, Rosie’s Diner closed on October 2nd, 2011. The property was sold through online auction, with a winning bid of $125,000. The new owners haven’t really done much with the property. For awhile the car dealership next to it would use it for special sales.

At one point a Montcalm County photographer, Danna Johnson, wanted to restore the diner, but that never materialized.

I drive past Rosie’s just about every day. The windows have been busted out, and the building is just falling apart. My guess is that some time in the near future it will be classified at “scrap” and hauled away to be crushed into a big square of metal.

It’s so sad to see this diner fade away after having such an interesting history behind it.

There is a Rosie’s Diner Facebook page. Many have posted pictures of the diner from over the years.

Please share your memories of Rosie’s Diner in the comments below.