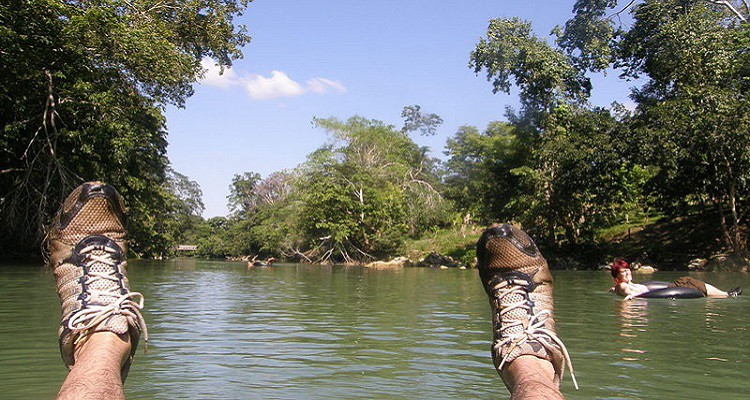 The River Goes in a Circle?

Grab your old inner tubes and let’s head to the river! It’s a great day for some tubing…

There have been times in my past when I, along with several friends, would grab some old tire inner tubes and head to the river for a day of tubing on the river. We usually charted our course and made arrangements for a car to be at the end of our journey.

Such was not the case for three women from Muskegon on Tuesday afternoon…(I’ve not used their names to prevent any further embarrassment.)

The twenty-something women had never been tubing. They figured it was a nice day…so what the heck…let’s do it. And they did! They somewhere secured some inner tubes, and headed to a popular launch site on the Muskegon River.

Just before they started their journey on the water, apparently they talked to someone who told them “the river goes in a circle”. They were led to believe that if they started their journey at the Maple Island Road bridge, the water and it’s current would bring them right back to the very same spot. Now if you were on the “lazy river” at your favorite water park that might be the case, but that does not happen on the Muskegon River…or any other river that I can think of.

So the women begin their inaugural tubing trip at about 4 pm on Tuesday afternoon. After floating down the river for about six hours, the women realized that perhaps they weren’t going to be going right by their car again. With it getting dark, the women decided to hit the shore and start shouting for help.

The cries for assistance went unheard on Tuesday. That meant the three women had to spend the night, alone, in the dark. The women said they hugged a tree and hollered for help. I can only imagine how afraid the trio must have been out in the pitch black darkness of night, hearing strange noises and not knowing where they were.

About noon the following day, their luck would have it that a fisherman heard their cries. The man called 9-1-1 and the firefighters launched a river rescue boat to pick up the women. They had suffered a few scratches and several bug bites, but aside from that, the three women were in good shape after their approximately 3 mile tubing trip.

I have a feeling the next time the women go tubing — if there is a next time — they will do things a little differently.

Their mistakes and misfortune are a great reminder to any and all that decide to go on a cruise down the river…regardless of the type of vessel you might be using.

First, the women could not call for help on their phone…because they did not have a cell phone with them. So they had to resort to using their voices to try to summon help. With no one around, their cries went unheard on Tuesday night.

Second, the trio never told anyone where they were going. So nobody realized they were missing. If they had let people know of their course on the river, someone might have questioned their whereabouts when they didn’t return home.

Third, maybe the “lazy river” at a water park isn’t such a bad idea for these three after all.