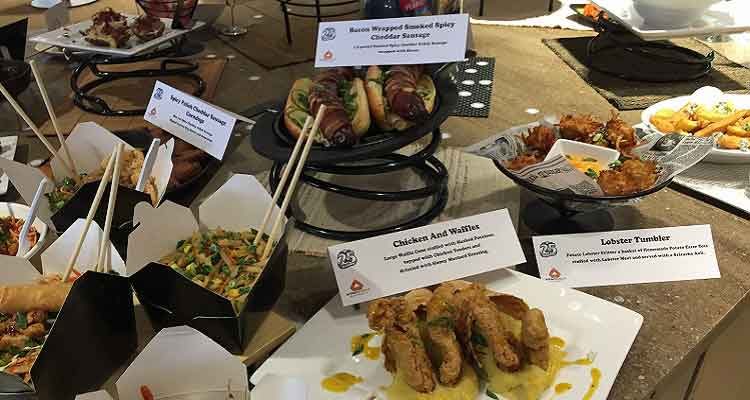 Sampling Food for the Whitecaps

On Wednesday, February 7th, I was invited to sample some of the possible foods that might be sold at Fifth Third Ballpark this season.

Many guests were gathered at Gordon Food Service in Wyoming to taste test some foods that just might be on the menu when you head to see a Whitecaps game in a couple of months. The West Michigan Whitecaps will be celebrating their 25th season here in Grand Rapids!

Our job was simple…try some of the foods and then rate and comment on them. There was no way anyone would be able to sample every offering (even if you came on an empty stomach!). I put a pretty good dent in the different dishes that were being offered up for us.

Some of my favorites included the Triple Play Fries. It was a plate of three different types of fries including a potato french fry, a sweet potato fry, and a pickle fry (a piece of deep fried pickle). Along with the trio of fries were several different dipping sauces. I thought this dish was a Home Run!

I also liked the Chicken and Funnel Cakes. There were a few different Chicken and Waffle type dishes. All were very good.

Some of the items were a bit spicy for me. I’m not one who lives very hot and spicy foods, but if you are into that type of item they were pretty tasty from what I heard others talking about.

Probably my favorite was the Deep Fried Lasagna! I’d by that in a heartbeat!

Oh and then there were the desserts! I had some Apple Pie Nachos. The “nachos” were actually cookies, covered in an apple pie filling. Very good!

I couldn’t bring samples for everyone, but I was able to take pictures of most of the foods. Enjoy looking through the photos below. I’m sorry if you start to drool!