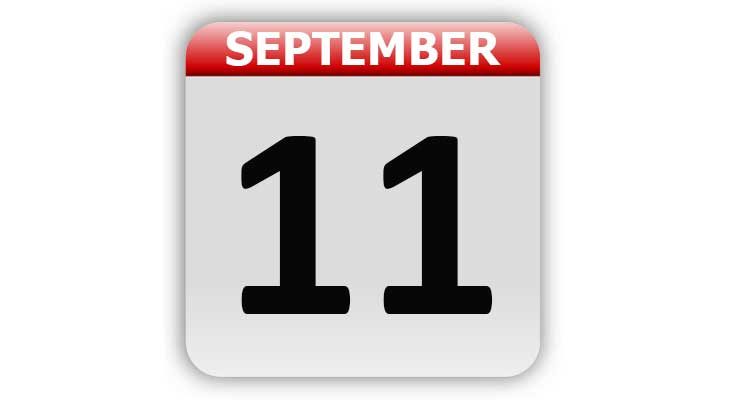 1777 – American forces, under General George Washington, were forced to retreat at the Battle of Brandywine Creek by British forces under William Howe. The Stars and Stripes (American flag) was carried for the first time in the battle.

1789 – Alexander Hamilton was appointed by President George Washington to be the first Secretary of the Treasury.

1883 – The mail chute was patented by James Cutler. The new device was first used in the Elwood Building in Rochester, NY.

1897 – A ten-week strike of coal workers in Pennsylvania, West Virginia, and Ohio came to an end. The workers won an eight-hour workday, semi-monthly pay, and company stores were abolished.

1903 – The first race at the Mikwaukee Mile in West Allis, WI was held. It is the oldest major speedway in the word.

1904 – The U.S. battleship Connecticut was launched in New York, NY.

1936 – Boulder Dam, in Nevada, was dedicated by President Franklin D. Roosevelt by turning on the dam’s first hydroelectric generator. The dam is now called Hoover Dam.

1941 – In Arlington, VA, ground was broken for the construction of The Pentagon.

1952 – Dr. Charles Hufnagel successfully replaced a diseased aorta valve with an artificial valve made of plastic.

1954 – The Miss America beauty pageant made its network TV debut on ABC. Miss California, Lee Ann Meriwether, was the winner.

1959 – Congress passed a bill authorizing the creation of food stamps.

1971 – The animated “The Jackson Five” TV series debuted on ABC.

1974 – The TV show “Little House on the Prairie” made its television debut.

1974 – The St. Louis Cardinals and the New York Mets set a National League record when they played 25 innings. It was the second longest game in professional baseball history.

1982 – The Trident carrying submarine, the U.S.S. Michigan, was formally commissioned in Groton, CT.

1985 – A U.S. satellite passed through the tail of the Giacobini-Zinner comet. It was the first on-the-spot sampling of a comet.

1987 – CBS television went black for six minutes after Dan Rather walked off the set of “The CBS Evening News”. The anchorman was upset that a tennis tournament being carried by the network had ran late.

1997 – John Lee Hooker received a star on the Hollywood Walk of Fame.

1999 – “The Wall Street Journal” reported that Bayer Corp. had quit putting a wad of cotton in their bottles of aspirin. Bayer had actually stopped the practice earlier in the year.

2001 – Two hijacked aircraft crash into the World Trade Center in New York, NY, while a third smashed into The Pentagon in Arlington County, VA, and a fourth into a field near Shanksville, PA, in a series of coordinated suicide attacks by 19 members of al-Qaeda. In total, 2,996 people were killed. (Read my blog about this awful day by clicking here.)

2012 – Terrorists attacked the U.S. consulate in Benghazi, Libya. Four Americans were brutally murdered and ten others were injured.

2019 – Severe Thunderstorms rolled through the Grand Rapids, MI area with damaging winds of 65-80 mph (locally 100 mph). The wind tore the roof of an apartment complex in the Belknap Lookout neighborhood. No tornado was reported.

National Day of Service and Remembrance

No News is Good News Day

Tags: A Look Back, Celebrity Birthdays, Days of the Year, September 11, Today in History