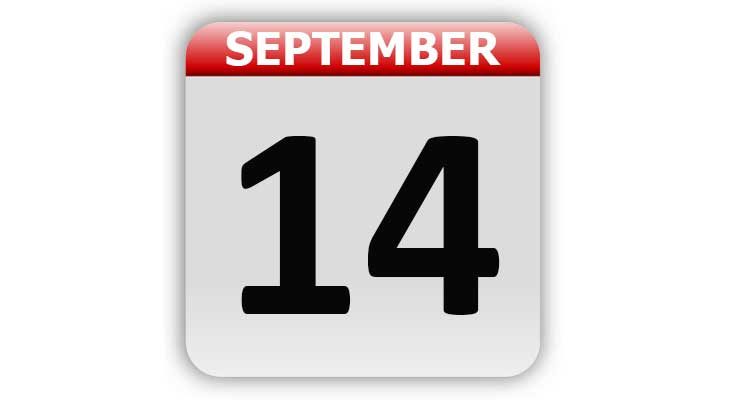 1814 – The poem “Defence of Fort McHenry” was written by Francis Scott Key after witnessing the British bombardment of Fort McHenry, MD, during the War of 1812. The poem was later used as the lyrics of the “Star-Spangled Banner”. The song became the official National Anthem of the United States on March 3, 1931.

1866 – The typewriter ribbon was patented by George K. Anderson.

1936 – The first prefrontal lobotomy was performed.

1948 – A ground-breaking ceremony took place in New York, NY, at the site of the future United Nations’ world headquarters.

1959 – The Soviet space probe Luna 2 became the first man-made object to reach the Moon. It crashed onto the lunar surface.

1960 – The Organization of the Petroleum Exporting Countries (OPEC) was founded. The core members were Iran, Iraq, Kuwait, Saudi Arabia, and Venezuela.

1963 – The first surviving quintuplets in the United States were born to Mary Ann Fischer.

1965 – TV’s “My Mother The Car” premiered on NBC. The series was cancelled a few weeks later.

1968 – “The Archies” premiered on CBS. The cartoon was based on the comic book series.

1968 – Denny McClain, of the Detroit Tigers, became the first pitcher to win 30 games in a season since Dizzy Dean 34 years earlier. He went on to win 31.

1979 – Kenny Rogers received a star on the Hollywood Walk of Fame.

1984 – MTV held its first annual Video Music Awards at Radio City Music Hall in New York, NY. Bette Midler and Dan Aykroyd co-hosted the event, which was highlighted by Madonna’s memorable performance of “Like a Virgin.” Video of the Year went to The Cars’ “You Might Think.”

1984 – Joe Kittinger became the first person to fly a balloon solo across the Atlantic Ocean.

1994 – Baseball’s acting Major League commissioner Bud Selig announced the cancellation of the 1994 season on the 34th day of strike by players.

1995 – Earth, Wind and Fire received a star on the Hollywood Walk of Fame.

1998 – Jaime Jarrin received a star on the Hollywood Walk of Fame.

1999 – Disney World closed down for the first time in its 28-year history. The closure was due to Hurricane Floyd heading for Florida.

2001 – President George W. Bush led the United States in a day of mourning for the victims of a terrorist attack. In Washington, the Senate voted 98-0 to give the President “all necessary and appropriate force” to respond to the terrorist attack. On the same day, the FBI released the names of the 19 suspected hijackers that had taken part in the attacks.

2007 – O.J. Simpson was questioned by Las Vegas, NV police about his possible role in a burglary a day earlier at the Palace Station Casino. A memorabilia dealer claimed that Simpson led a team of armed men into his hotel room to steal items that once belonged to the former football star. Simpson claimed he was just retrieving things that were rightfully his.

2010 – George Michael was sentenced to eight weeks in jail after he pleaded guilty to driving under the influence and drug possession. The incident occurred on July 4 when he crashed his car into a store.

2018 – Hurricane Florence hit the North Carolina shore. The rain continued for days and caused billions of dollars in damage and more than 50 deaths.

Tags: A Look Back, Celebrity Birthdays, Days of the Year, September 14, Today in History