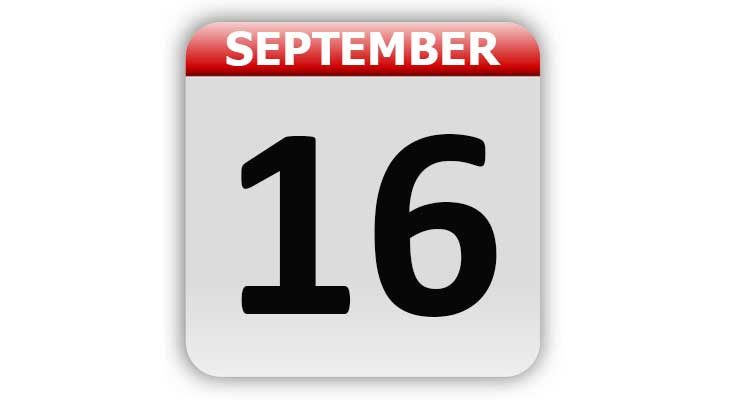 1620 – The Mayflower departed from Plymouth, England with 102 passengers on board. The ship arrived at Provincetown, MA, on November 21st and then at Plymouth, MA, on December 26th.

1782 – The Great Seal of the United States was used for the first time when it was impressed on document to negotiate a prisoner of war agreement with the British.

1908 – The General Motors Company was founded by William Crapo “Billy” Durant. The company was formed by merging the Buick and Oldsmobile car companies.

1919 – The American Legion was incorporated.

1924 – Grand Rapids, MI’s first radio station signed on the air. It was WEBK, which would later become WOOD Radio.

1940 – President Theodore Roosevelt signed into law the Selective Training and Service Act, which set up the first peacetime military draft in U.S. history.

1959 – The first successful photocopier, the Xerox 914, was introduced in a demonstration on live television from New York, NY.

1960 – The U.S. and Canada began construction of the Sault Ste. Marie International Bridge.

1968 – The final episode of TV show “The Andy Griffith Show” aired on CBS.

1974 – President Gerald Ford announced a conditional amnesty program for draft-evaders and deserters during the Vietnam War.

1976 – The Episcopal Church formally approved women to be ordained as priests and bishops.

1993 – The first episode of “Frasier” aired on TV. The series would run for 11 seasons and pick up a total of 37 Prime-time Emmy awards.

1994 – Exxon Corporation was ordered by federal jury to pay $5 billion in punitive damages to the people harmed by the Exxon Valdez spill in 1989.

1994 – Two astronauts from the Space Shuttle “Discovery” go on the first unthethered spacewalk in 10 years.

1998 – Universal paid $9 million for the rights to the Dr. Seuss classics “How the Grinch Stole Christmas” and “Oh, the Places You’ll Go.”

1998 – Meryl Streep received a star on the Hollywood Walk of Fame.

2004 – Hurricane Ivan made landfall in Gulf Shores, AL as a Category 3 hurricane.

2007 – O.J. Simpson was arrested in Las Vegas, NV, for his involvement in the alleged armed robbery of sports memorabilia from a hotel room at the Palace Station Hotel and Casino.

International Day for the Preservation of the Ozone Layer

Tags: A Look Back, Celebrity Birthdays, Days of the Year, September 16, Today in History