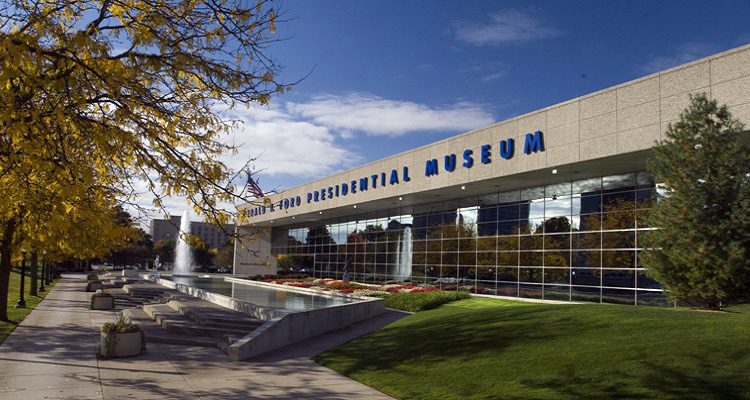 September 18, 1981 — wow, there was so much going on in downtown Grand Rapids to prepare for the dedication of the Gerald R. Ford Presidential Museum.

It was a star-studded event. From what I can remember, I think all the major networks were broadcasting live from Grand Rapids. The town was buzzing with all the celebrities and dignitaries that where here. Those on the guest list included President and Mrs. Reagan, former Secretary of State Henry Kissinger, President José López Portillo of Mexico, Canadian Prime Minister Pierre Trudeau, Japan’s Minister of Foreign Affairs Sunao Sonoda, and former French President Valéry Giscard d’Estaing.

Bob Hope served as master of ceremonies. A Bob Hope Special for NBC was also taped during the festivities. DeVos Performance Hall was the venue for the special. The television program aired on NBC on October 22nd, 1981. The list of entertainers that took part in the television tribute to Gerald Ford included Pearl Bailey, Debby Boone, Foster Brooks, Glen Campbell, Sammy Davis Jr., Tony Orlando, Mark Russell, and Danny Thomas. Here is more information on that special from imbd.com

I was hoping to find video of the special, but all I could find was a segment from the opening of the program. Here is that video featuring the University of Michigan Marching Band…

Since that time, both President Ford and his wife, Betty, have passed away. Gerald Ford died on December 26, 2006. Approximately 60,000 people viewed the casket as Ford lay in repose in the museum lobby. After Betty Ford’s death on July 8, 2011, the museum closed the following day to prepare for her funeral. Her casket also lay in repose for people to pay their final respects during a public visitation. Both Gerald and Betty are buried on the grounds of the Presidential Museum.