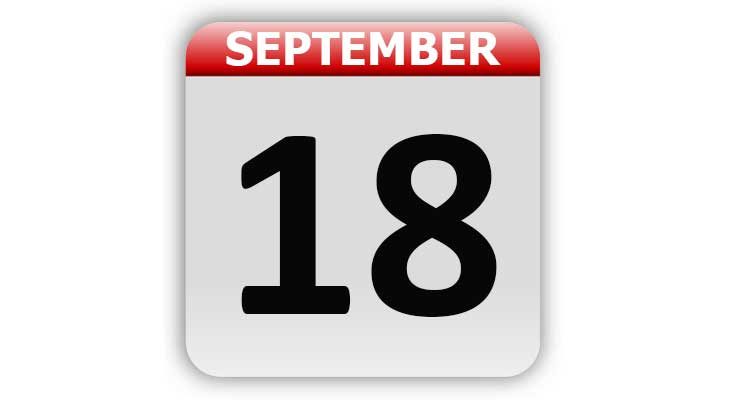 1769 – It was reported, by the Boston Gazette, that the first piano had been built in North America. The instrument was called the spinet and was made by John Harris.

1793 – The first cornerstone of the Capitol building was laid by President George Washington.

1830 – The first locomotive built in America, the “Tom Thumb”, raced a horse on a nine-mile course. The horse won when the locomotive had some mechanical difficulties.

1870 – Old Faithful Geyser was observed and named by Henry D. Washburn during the Washburn-Langford-Doane Expedition to Yellowstone.

1927 – The Columbia Phonograph Broadcasting System debuted with a network of 16 radio stations. The named was later changed to just CBS.

1946 – The toy company Mound Metalcraft was founded in Mound, MN. The company changed its named to Tonka Toys Inc. on November 23, 1955.

1947 – The United States Air Force was established as a separate military branch by the National Security Act.

1965 – The first episode of “I Dream of Jeannie”, starring Barbara Eden and Larry Hagman, was shown on NBC-TV. The show continued until September 1, 1970.

1969 – Tiny Tim announced to Johnny Carson, on “The Tonight Show”, his engagement to Miss Vicki Budinger. Carson asked the two to be married on the show. They made TV history with their wedding on December 17, 1969.

1975 – Newspaper heiress Patricia Hearst was captured by the FBI in San Francisco. She had been kidnapped by the Symbionese Liberation Army 19 months earlier.

1977 – Voyage 1 took it’s first photograph of the Earth and the Moon together.

1983 – The members of KISS appeared on MTV without their makeup.

1998 – Reba McEntire received a star on the Hollywood Walk of Fame.

1998 – The FDA approved a once-a-day, easier-to-swallow, medication for AIDS patients.

2003 – Robert Duvall received a star on the Hollywood Walk of Fame.

2009 – The animated movie “Cloudy with a Chance of Meatballs” premiered in theaters.

Tags: A Look Back, Celebrity Birthdays, Days of the Year, September 18, Today in History