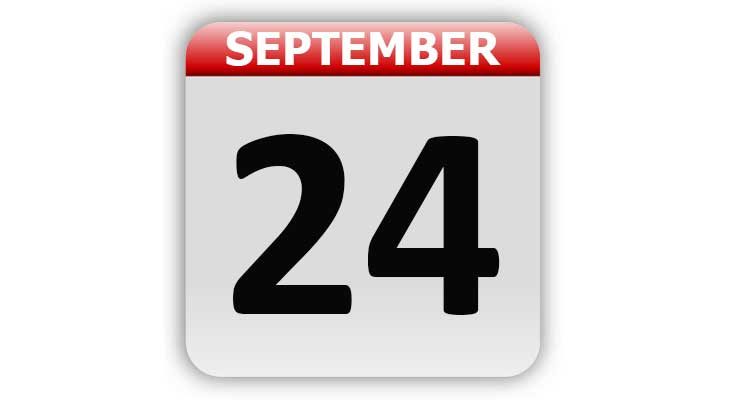 1830 – Stephen Simmons was the last person to be executed in Michigan. He was hung for killing his wife.

1869 – Thousands of businessmen were financially ruined after a panic on Wall Street. The panic was caused by an attempt to corner the gold market by Jay Gould and James Fisk.

1914 – The Grand Rapids Press set up an electronic scoreboard to show play by play action of the 1914 World Series.

1955 – President Dwight Eisenhower suffered a heart attack while on vacation in Denver, CO.

1961 – The animated TV show “The Bullwinkle Show” premiered in prime time on NBC. The show was originally on ABC in the afternoon as “Rocky and His Friends.”

1976 – Newspaper heiress Patricia Hearst was sentenced to seven years in prison for her role in a 1974 bank robbery. An executive clemency order from President Jimmy Carter sets her free after 22 months.

1977 – The TV show “The Love Boat” debuted on ABC. The theme song was sung by Jack Jones and was written by Paul Williams and Charles Fox.

1988 – James Brown was arrested in Georgia after a two state car chase.

2003 – Anthony Hopkins received a star on the Hollywood Walk of Fame.

2014 – The Mars Orbiter Mission made India the first Asian nation to reach Mars orbit, and the first nation in the world to do so in its first attempt.

Save Your Photos Day

Tags: A Look Back, Celebrity Birthdays, Days of the Year, September 24, Today in History