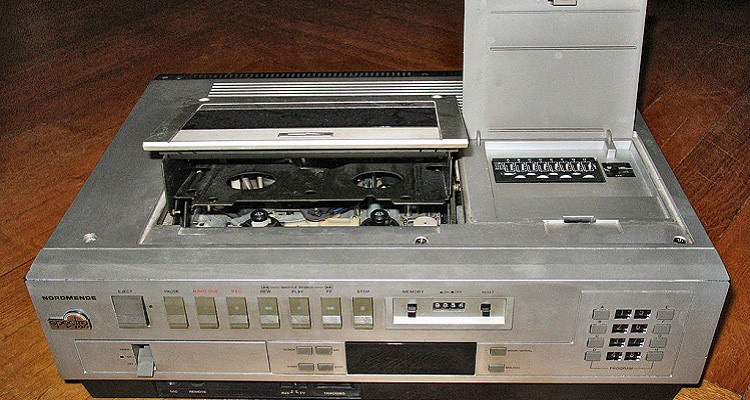 If you don’t have a VCR — and want one — you better make that purchase soon! The VCR is following in the footsteps of the 8-track player…and will soon be extinct.

I encountered my first VCR in the early ’80s. My aunt and uncle had purchased one and needed some help programming it. (Yes, they were tired of the flashing “12:00”!). I remember sitting down with the instruction manual trying to figure this thing out, and how to program it to record certain shows. It certainly wasn’t an easy task and one that I was never able to teach either of them. They ended up using their VCR for recording programs as they watched them (which kind of defeats the purpose of having a VCR), or they would play rented videotapes to watch movies (which I always thought was very cool at the time…we could watch a full length, fairly recently released movie, in our own living room!)

In researching information for this blog post, I was surprised to find out that the first home video recorder was produced back in 1963. It took about 10 more years for the video cassette format to be developed and available for home use — and somewhat affordable for most people. By the mid-1980s, about 15 million American homes had a VCR. I think I purchased my first device sometime in the late 80’s. It wasn’t cheap. I remember saving up for it and I think I paid somewhere in the $500-800 range for it. Mine was a little easier to program…it had the new “VCR Plus+” technology. With this added feature, you only had to type the numeric code into the VCR and it would program the recording for you. Do you remember seeing all the codes printed in the TV Guide? (And yes, TV Guide is still printed!)

Over the years I’ve had probably 3 or 4 different VCRs. I still have one in my entertainment center, but it’s not hooked up to anything. I just keep it around in case I ever want to watch some old newsclip, or TV show, I might have recorded. (And how many of us have unmarked video cassettes that we have no idea what’s on them?!)

Well if you want to replace, or buy, a new video cassette recorder, you better do it soon. Apparently there is only one company that still manufactures the machines. It’s the Funai Electric and they make Sanyo brand electronics. Due to declining sales and difficulty in obtaining parts…the last VCR will be rolling off the assembly line at the end of July.

At one point millions of VCRs were sold every year. Over time that number has diminished as there are now other ways to record, or obtain, television shows or movies. Funai said that last year they only sold 750,000 VCRs. That number actually surprised me. I wouldn’t have thought they would have sold anywhere near that many!

I guess I should make a project out of sorting through my old videotapes and finding away to “digitize” them for storage. I certainly don’t want something to happen to my VCR and not be able to save some of that stuff.

Now This has put together a very cool video about the VCR, here is the video on their Facebook page.

If you would like to read more on the history of the Video Cassette Recorder, here is the wikipedia.org page.

Here a story from the New York Post about the end of the line for the VCR.