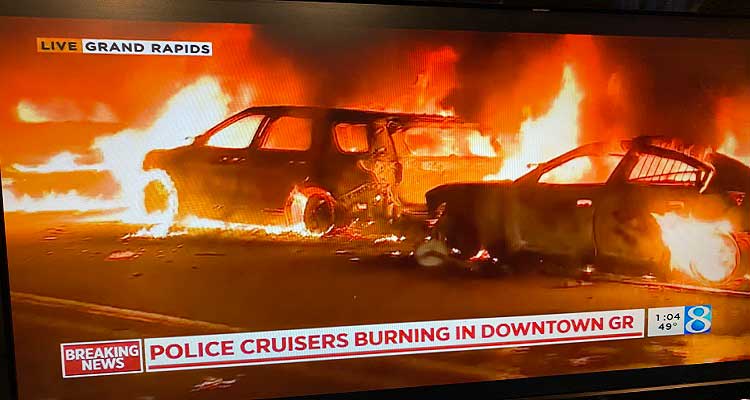 On Saturday, I got into a pretty heated discussion on Facebook about the word “thug”. This all happened before we knew what was going to take place that evening.

It was all in response to a post I saw — by a person on Facebook — that addressed President Trump calling one group of people “thugs”, while also calling another group “good people”. The graphic in the post was trying to suggest that the President was referring to those protesting that Black Lives Matter as “thugs”.

On April 16th, when referring to the protesters in Lansing, the President Tweeted: “The Governor of Michigan should give a little, and put out a fire. These are very good people, but they are angry. They want their lives back again, safely. See them, talk to them, make a deal.”

There are some that are trying to compare that statement, referring to protesters as “good people”, to the following Tweet from the President on May 26th that read: “These THUGS are dishonoring the memory of George Floyd, and I won’t let that happen.”

Second, people were bashing President Trump for using the word. Apparently many of them forgot that Barak Obama also used the term “thug” while discussing  a similar situation in Baltimore back in 2015…

He said “thug” and there was no outrage.

In the discussion I was having on Facebook, people tried to argue that “thug” was also a racist word.

So I did what most people do when they have a question — I went to Google and asked “what is the definition of thug?”

The information returned to me was…

No mention of race in that definition at all. So, if anyone thinks the term is racist, perhaps it is THEY who are inserting a “race” into the definition and should educate themselves on the meaning of the word. I couldn’t find ANY definition of “thug” that included race. And the term was used by two Presidents — of different race.

So I then have to ask — what do you call the people that terrorized our city of Grand Rapids on Saturday evening?

They were violent, they were criminal in their actions… THEY WERE THUGS!

I have no problem with peaceful, meaningful protests. I encourage them, but when another group of people take over the situation and start destroying businesses and our town — I’m going to continue to call them exactly what they are… THEY ARE THUGS!

At about 3 am Sunday morning, while watching the live coverage of the damage and destruction that was still happening in our city, I just posed a question to those who were opposing me and my terminology on Facebook earlier in the day. I simply asked…”What do you call these people now?”

The entire post and thread with the discussion mysteriously disappeared later Sunday morning. I never did see how they responded to my question.