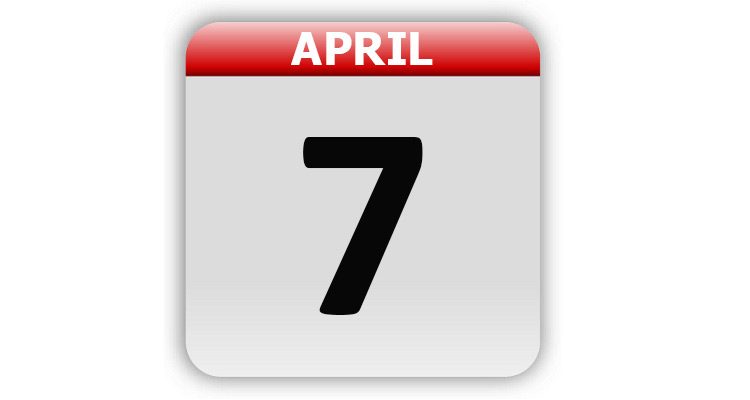 1864 – The first camel race in America was held in Sacramento, CA.

1888 – P.F. Collier published a weekly periodical for the first time under the name “Collier’”s.

1930 – The first steel columns were set for the Empire State Building.

1933 – Prohibition in the United States was repealed for beer of no more than 3.2% alcohol by weight, eight months before the ratification of the 21st Amendment.

1940 – Booker T. Washington became the first black to be pictured on a U.S. postage stamp.

1957 – In New York, NY, the last of city’s electric trolleys completed its final run from Queens to Manhattan.

1963 – At the age of 23, Jack Nicklaus became the youngest golfer to win the Green Jacket at the Masters Tournament.

1966 – The U.S. recovered a hydrogen bomb it had lost off the coast of Spain.

1978 – Development of the neutron bomb was cancelled by President Jimmy Carter.

1982 – It was cold! Temperatures dropped to near zero around the Great Lakes as arctic high pressure moved into the area. Lansing fell to -2° for their latest sub-zero temperature on record. Muskegon dropped down to 1° and Grand Rapids saw a low of 3° for the coldest April temperatures on record.

1983 – The Chinese government canceled all remaining sports and cultural exchanges with the U.S. for 1983.

1984 – Jack Morris threw a no hitter in a 4-0 shutout of Chicago. He was only the fourth Detroit Tiger to do so. It was the first time it had happened since 1958.

1990 – John Poindexter was found guilty of five counts at his Iran-Contra trial. The convictions were later reversed on appeal.

1990 – At Cincinnati, OH’s Contemporary Arts Center a display of Robert Mapplethorpe’s photographs went on display. On the same day the center and its director were indicted on obscenity charges. The charges resulted in acquittal.

1998 – George Michael was arrested in a public restroom in Beverly Hills, CA for lewd conduct. He was sentenced to community service for the incident.

1998 – Mary Bono, the widow of Sonny Bono, won a special election to serve out the remainder of her husband’s Congressional term.

2006 – Meredith Viera confirmed she was leaving ABC’s “The View” to replace Katie Couric on “Today”.

2008 – More than 10 years after Princess Diana and her boyfriend, Dodi Fayed, died in a car wreck in Paris, a jury in London concluded that the two were killed by a combination of the “grossly negligent driving” of their chauffeur and the paparazzi pursuing their car.

2008 – Kathie Lee Gifford returned to TV, as co-host of the fourth hour of the “Today” show.

2016 – The final episode of the final season of TV’s “American Idol” aired on FOX.

2021 – The Centers for Disease Control and Prevention announced that the SARS-CoV-2 Alpha variant had become the dominant strain of COVID-19 in the United States.

International Day of Reflection on the 1994 Genocide in Rwanda

National Girl Me Too Day