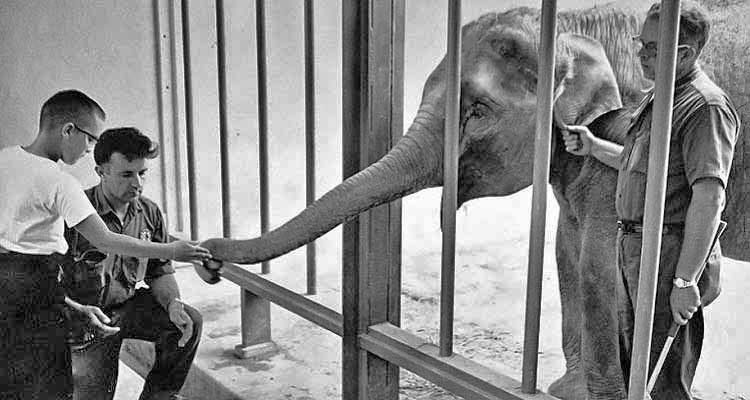 “Zooella” was the only elephant to ever reside at John Ball Zoo. It took a year to find funding to bring an elephant to John Ball Zoo. Eventually, the money was there and an elephant was located. She arrived at the zoo on June 16, 1965. Her origins are uncertain, but according to zoo staff, she may have been a circus elephant. When she arrived, she was estimated to be 10 to 12 years old.

Her name was Gayle. But with a new home, it was decided she also needed a new name. A contest was held to name the new pachyderm. The winning name chosen was “Zooella”. Her keepers continued to call her Gayle for training purposes.

Zooella’s long time trainer was a man by the name of Harry Maxim. I went to school with his son, Steve, from grade school all the way through high school. As a kid, Steve and I would go to the zoo to meet with Harry. Although we never got “up close and personal” with any of the zoo animals for obvious safety reasons, we did get to see some of the “behind the scenes” parts of the zoo, including the backside of where Zooella resided.

Harry had a special relationship with Zooella. I can only describe it as being similar to when a pet owner walks in the door after work — and the pet comes running up to greet their owner. Zooella did the same thing whenever she heard Harry’s voice. You could tell that Harry had a place in her heart.

In early 1978, Harry’s health began to decline and he took a sick leave from his job at the zoo. His absence was noticed by Zooella. She began to have behavior problems including having temper tantrums and not cooperating with other zoo staff members. Only Harry’s helper — who Zooella was somewhat familiar with — was tolerated. The zoo began looking to relocate her… perhaps at a zoo that had other elephants.

On April 4th, 1978, Zoella collapsed onto her side. Zoo officials suspected a stroke, infection, or maybe a brain tumor. The Zoo vet and others worked to get her back up on her feet. They consulted with other zoos, gave her fluids, and examined her to try to determine the problem. They knew if Zooella didn’t get up within a few days, it would be deadly.

Her former keeper, Harry, in failing health himself, came back to the zoo to sit with his old friend. “Before I left, she followed me around like a hound,“ Maxim said. “She knew I was sick. She knew it was me. She reacted to my voice, but the only movement was in her trunk and in her eyes.”

Finally on April 7th, 1978, it was decided that Zooella would have to be euthanized. She had lost 1000 of her 6000 pounds. Harry was there with her when she was put down.

After her death, a necropsy was done on-site. Tests showed she had suffered hemorrhaging in her brain and organ failure.

Some speculate that perhaps Zooella died of a broken heart from missing the zookeeper she interacted with for over a decade.

In putting together this post, I asked Harry’s son, Steve, for some addition information. In a message back to me he commented: “I know that my dad loved animals and he had a special friendship with Zooella. It’s a difficult thing to look back on, but I know my dad always felt much compassion for Zooella and he did the best he could for her during her life.”

Here is the official website for John Ball Zoo